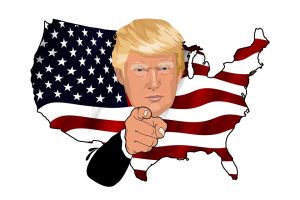 With the 2020 presidential election nearing, investors want to know how to trade it.

Oftentimes, the best way to trade it, is by trading volatility itself.

This FREE strategy guide breaks down 11 specific options methods for a total game plan in any market condition!

After all, if there’s a history of wild volatility ahead of elections, why not take advantage of it?

For example, right before the 1992 election, the VIX exploded from a low of 12.47 to 20.51. At the same time, the Dow Jones slipped from a high of nearly 3,400 to less than 3,100, handing investors the opportunity to trade uncertainty ahead of elections.

In 1996, volatility popped and dropped ahead of the election a few times. In August 1996 for example, the VIX ran from 13.70 to a high of 20.51 again. On uncertainty, the Dow would slip slightly from a high of 5,762 to a low of 5,550 only to recover shortly after. Again, uncertainty gave way to a short-side opportunity.

Ahead of this election, the VIX exploded from a low of 16.54 to a high of 31.74. At the same time, the Dow slipped from a high of 11,400 to a low of 9,651. Again, investors were offered an opportunity to make money from uncertainty on the short-side of the market, and on the long side of volatility.

The VIX exploded this year from a low of 20 to a high of 90, as the Dow plummeted from 11,500 to a low of 7,500. Of course, much of this was also due to subprime fallout this particular year. Still, it offered us another opportunity in an election year.

There wasn’t a great deal of volatility here, but there was some. In fact, in August 2012, the VIX began to jump from a low of 13.28 to a high of nearly 20. The Dow would pull back slightly.

As expected, the VIX ran higher. This time, it popped from a low of about 12 to more than 22 heading into election uncertainty. The Dow would trend lower over this time frame. Still, it offered us an opportunity to trade the long side of volatility, and the short side of markets.

Interesting to note, once uncertainty began to fade after each election, so did market fear.

As that happened, investors could trade the long side of the market, and the short side of volatility.  Keep this in mind in 2020.

It’s time to go beyond the basic buy/sell put or call. Ramp up your options trading prowess with the advanced strategies in this complimentary guide.

Short, sweet and easy to understand, you’re sure to find a strategy that fits in with your market outlook, risk tolerance and reward expectations.

GET YOUR COMPLIMENTARY GUIDE HERE!