A Nation On Sale: The Real Danger of Falling Prices

We’re Slashing Prices to the Bone!

You’ve seen the ads. The sound of the siren song beckoning us to take action, with the allure of rock bottom prices and never-to-be-seen-again-bargains. We all want to believe we’re getting a great deal. Nobody wants to walk away from the purchase of a new car or designer pair of shoes thinking, “Man did I pay way to much.”

The generally held belief is that falling prices are a good thing. When prices go down our dollars buy more. We’re able to live on less and make each dollar stretch just a little farther. But what if an entire nation, every industry, every sector, starting slashing prices? What would that mean for an economy? Today I want to talk a little about the deflationary cycle and why it’s so dangerous to an economy.

Before I do, a quick note. This week I had the privilege to host about 30 traders at a live trading event here in Kansas City. The group was evenly split with about half being members of our MasterMind group and the other half being recent graduates of my Ratio Masters Series course. I just wanted to say again to those of you who attended how very blessed I felt hearing your stories and getting the chance to interact and work with you individually.

There were a lot of connections made at the event. With the United States, Great Britain, Australia, New Zealand, Italy, and Canada all represented it was a week full of great food great networking and fantastic trading. Thank you all for your commitment to excellence and your faith and trust in me.

I don’t know if it was a busy week or just that I did to much talking but this weekend I find myself without a voice. (literally). A very soar throat has taken me to a whisper so I’m going to skip the trading video this week and simply focus on our continued discussion of deflation and QE.

Now to the meat of the matter…

Last week we discussed the the inflation scare and the velocity of money. The current fear from those in the media and around the dinner tables is that of inflation. Certainly we have seen increases in things like gold, corn, steal, and other commodities. But is this due to monetary policy? Most likely not. As we discussed in last week’s preview the velocity of money is slowing. That means less money is changing hands. In short it means individuals and companies are spending less and less.

For the past 50 years the United States and much of the world have been in a rapid credit expansion. We have put off paying for the desires of today with easy credit and intense desire to keep up with the Jones. Most of us don’t remember a time when you needed first rate credit, a long stable job history and 20% down to buy a house. Most of us have never gone to our good friend Mr. Samuels who owns the local “Main Street Trust” to ask for a car loan. We live in a world of distant creditors and faceless underwriters.

By 2005 the U.S. savings rate had gone negative. That meant the average American had nothing. He or she had mortgaged their house at 120% of it’s value, had thirty thousand dollars in school loans, zero savings, and about ten thousand dollars of credit card debt. Then the financial collapse hit. Americans were forced to take a good hard look at their balance sheets and realized they were on and unsustainable path.

Since that time savings rates have climbed back near 6% and although credit is still easy thanks to our good “friends” at the Fed, banks are having a hard time finding anyone to loan money to.

So why is the Fed so concerned with stimulating the economy? Why can’t we just let nature run it’s course? If we know Americans are still underwater and paying off mountains of debt why not give them some time to build up some reserves? In a few years the ship will right itself and the economy will return to normal, steady growth. Right?

Technically that’s correct. But the fed is concerned with the real fear that if people stop spending it could send us into a downward spiral that would culminate in massive unemployment, boarded up businesses, decades of stagnant growth, and a generation in poverty.

The easiest way to illustrate what I am talking about is with a simple diagram of what I call the deflationary cycle. 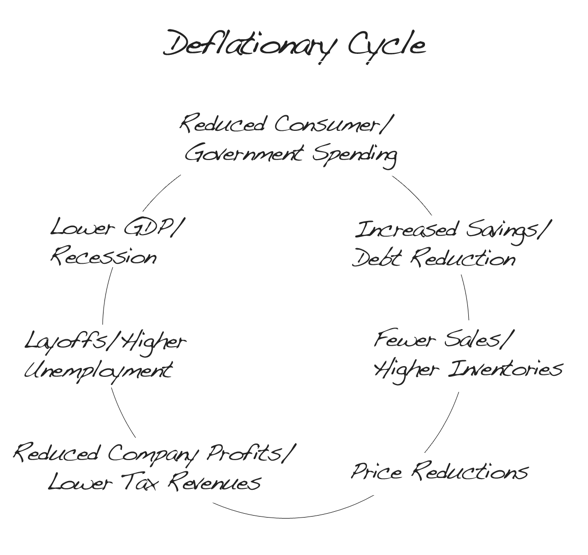 The initial spending reduction can come from reduced consumer spending or government spending. The key principal here is the money is leaving the economy. By reducing spending consumers end up saving money or paying down debt. The same is true for a government. The money either goes to debt reduction (don’t laugh) or to a surplus in revenue.

With decreased spending, businesses make fewer sales. It becomes harder to get people in the door. The inventory reserves that were once adequate for market conditions are now to high. This increase in inventories forces businesses to modify their production schedules.

While lower prices are great for the consumers who are now getting much better prices on everything they buy, it’s not good for companies. The increased cost for advertising and the decrease in revenue caused by pricing discounts lead to reduced corporate profits. Fewer profits also means lower tax revenue to the government that can reek havoc on local municipal budgets.

(Side note. This is why Obama’s plan to offer tax breaks to companies who hire new employees is so stupid. If there is no work, why would a company hire a 30,000 dollar a year employee to save 3K on taxes? The only companies this type of program benefit are those that intent to hire anyway. These types of programs are a blatant example of how little the current administration understands about what drives an economy and what’s needed to fix it.)

High unemployment, few job opportunities, increased savings rates, and slow to no GDP growth. Sound familiar? Now do you see why Bernanke is so nervous? What recourse does he have? In a deflationary market the fed is limited in it’s ability to respond. In fact, to spite what he may say, the fed has very little left in it’s powder keg in the event things do not improve. If the cycle continues it could lead strait into a national depression and that would mean a decade of poverty and a generation of rebuilding.

In most cases all this deflation stuff is temporary. Prices fall to a level where consumers feel comfortable spending, profits adjust and things stabilize. We see this every day in many different industries. It part of the market cycle. A problem arises when the deflation becomes widespread across multiple sectors. If things get out of hand deflation becomes an economic spiral of death. And that is why we’re faced with the very real possibility of a third round of QE. We are literally playing the only card we’ve got left.