As we’ve discussed before, the airline industry is a cyclical one. Due to the terrorist attacks in the last recession, that recession was particularly difficult for airlines. So far during this recession, however, passenger miles have held up. Here’s a look at airline passenger miles over the last decade and a half: 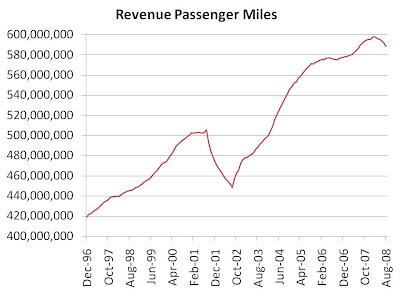 While airline miles have tapered off, we see that there is nowhere near the drop-off one might expect from a cyclical industry. This chart suggests the airline industry is now a relatively stable industry. But that would be an errant conclusion.

Part of the reason passenger miles have been stable lies in the exceptional fuel price volatility that has occurred in recent years. As oil prices rose with the economy, growth in miles was tempered by high fuel costs (on the chart we see that miles did not grow much from 2005 to 2007 despite a strong economy). On the flip side, as the economy has tanked, dropping fuel prices have made tickets more affordable. This overall combination has resulted in the seemingly stable demand we see in the chart, when in fact this was caused by exceptional price volatility.

Of course, this apparent demand stability doesn’t mean that airlines are not currently struggling (in fact, they often will as we discussed here). Value investors, however, should beware. Airlines do not make for safe or fruitful long-term investments, as we discussed here.