It will come as a surprise to no one that retail motor vehicle sales for January in the US were abysmal. But to put in perspective just how bad they were, here is a graph depicting annualized seasonally adjusted monthly retail sales since 1967 (in millions): 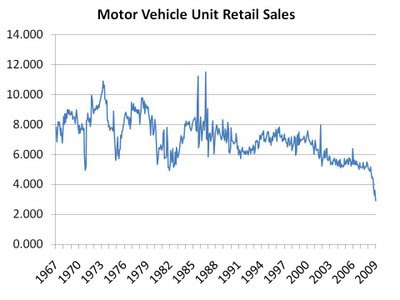 Annualized sales in January of 2009 managed to out-bottom even even the worst of months over the last several decades! How can this be? Considering the major increases in both US population and US incomes between 1967 and today, this news is difficult to fathom.

The easiest explanation is that the prevalent fear now gripping this economy is as bad as it has ever been in recent history. Indeed as we saw here when we looked at consumer confidence levels over time, people have rarely been so scared as they are now.

But a careful look at the chart reveals that sales have actually been trending downward for some years now. While much of it can be explained by the high oil prices that pushed those on the margin to choose alternative methods of transportation, not all of it can be. In fact, auto sales appear to have started trending down ever since the mid nineties, despite low oil prices in the ensuing decade!

One additional explanation that might explain the apparent decade long slump is a change in quality of both automobile parts and service. Fierce foreign competition may have improved engine capabilities and therefore the mileage drivers have been willing to put on their cars before buying new ones. Furthermore, improvements in servicing and repairs may be allowing buyers extra time between vehicle purchases.

Despite the fact that this suggested improvement in quality may continue to take a bite out of new car sales, it is clear that the recent catastrophic drop is the result of a cyclical downturn. Once money starts to flow again (thanks to both fiscal and monetary stimulus), annual car purchases will return to more sustainable levels. As value investors, we don’t know when that will happen, but we look to buy companies that are financed to withstand long downturns and which trade at discounts to their intrinsic values due to the cyclical economic turmoil that currently persists.