In order to determine if a company’s debt load is over burdensome, investors often use interest coverage ratios. One such ratio is found by dividing operating income by interest due, in order to determine how easily the company is able to meet its interest requirements. However, investors must keep in mind that interest coverage ratios only demonstrate what has occurred in the past. Therefore, it’s imperative to consider such information only when simultaneously considering what may occur in the future. 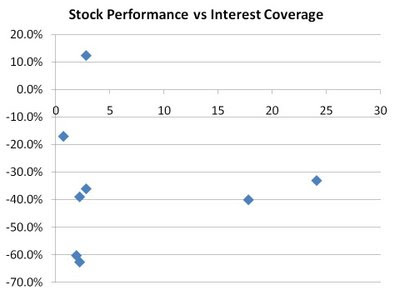 The “safer” the company appeared by the interest coverage ratio six months ago doesn’t seem to have had any bearing on the stock performance of the company. The reason? The companies have managed their way through this downturn with differing levels of success. Some have been overexposed in the worst performing segments for example, while others were able to streamline costs better than the competition. As a result, the chart below depicts how interest coverage ratios have changed since the snapshot we looked at six months ago: 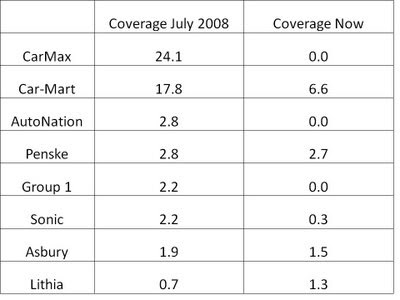 Clearly, relying on interest coverage data has the limitation that none of the information is forward looking. Investors who do not consider more than past data are doomed to fall into traps from which recovery is very difficult.

Notice how one company’s interest coverage actually improved despite the dire economic circumstances in this industry! We’ll explore why in a future post.