He warned that while Baby Boomers have rarely been “challenged”—having missed both World Wars and the Great Depression—they may face their first real challenge in facing a retirement rife with hyperinflation.

Despite the recent all-time highs in the Dow, millions of Americans have a dismal outlook on their ability to retire, according to a survey conducted by the Employment Benefit Research Institute. 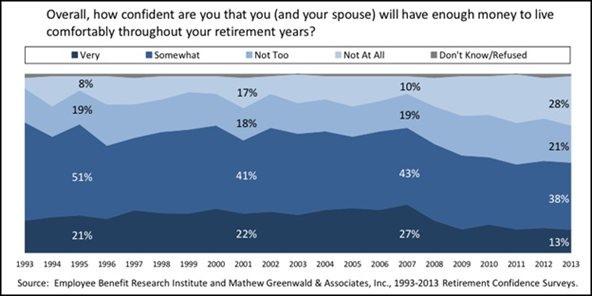 Why are 87% of Baby Boomers lacking confidence?

DEBT AND THE US DOLLAR AS THE GLOBAL RESERVE CURRENCY

Echoing my recent articles, Embry said, there is too much debt in the global economic system at all levels. Sustainable growth remains an illusion. Governments have avoided the issue by printing more and more money.

Embry called today, “a very problematic time for the U.S. dollar.” He fears the U.S. dollar will lose its role as the world’s reserve currency in the near future. The United States has not lived up to its responsibilities as provider of the world’s reserve currency, due to lax fiscal policy. This leads China to cut deals with other countries where the dollar is being knocked out of the transaction. As such transactions become more common, the U.S. dollar’s use will decline and with it, demand for dollars will drop.

Sprott stated that all central planners want is people to think the economy will be better in six months or so. But, U.S. future liabilities top $220 trillion, and are increasing. For 2012, liabilities were $6.6 trillion, up from 2011’s $5 trillion. This year liabilities will hit $7 trillion.

Sprott said, “The U.S. government will fail. It will not pay what they say they will pay retirees.” Pension funds are underfunded by 25% and with the bond market in decline, if stocks start to fall, pension funds will fall farther behind.

In the U.S., Social Security lacks a fund with assets in it. In Canada, where there is a pension plan with money in it, workers who are 35 – 40 now must work until they are 67 to receive full retirement benefits. How long will U.S. workers need to work to collect any Social Security if the government is bankrupt?

With such uncertainty, where should individuals invest?

GOLD: SALVATION FOR MANY

Embry said, “I think gold is going to be the salvation for a lot of people.” While the rule of thumb used to be 10% gold in a portfolio, he lamented, “Things are far, far worse and it should be closer to 20% or 25%.  It’s insurance if your worst fears are realized…What gold will do is preserve purchasing power.”

Purchasing power is crucial. By printing money and borrowing heavily, governments are following policies that will lead to hyperinflation. This will make it extraordinarily difficult for people living on fixed incomes as the dollars and paper investments they hold are decrease in value compared to real assets, like food, shelter and gasoline.  Sprott points out that gold has gone up 500% in 13 years, and will likely go up 100% – 200% in the near future.  He recommends a portfolio with at least 10-20% invested in gold.

Stocks appear to be doing well today. Why? Embry explains, “Stocks have an elevated value because of all the money being created in the world.” Japan and the U.S. are creating $160 million a month, which has to be spent or invested. This massive infusion of cash has elevated stocks, but not gold, making gold the better alternative.

Embry said, “I do like certain stocks because they represent real assets, but on the margins, I think you should be moving stocks into gold, particularly if you’re underweight gold.”

NOW IS THE TIME TO BUY GOLD

Embry believes now is the time to buy gold. “I think in the fullness of time,” he said, “this will be seen to be the greatest buying opportunity in the entire bull market that started more than 12 years ago. Prices have been pounded down to levels where the mining companies can’t make any money and anyone who says that gold is in a bubble; that’s just a ridiculous assertion.”

Many people are buying ETF’s and gold certificates.  Embry warns, “make sure you own real gold.” Only real gold will be worth much if hyperinflation appears.

[Editor’s note: Do you feel ready for retirement? Do you expect to receive Social Security in your retirement years? Share a comment below.]

Learn more about the author here.

Protect Profits For Your Retirement With Options

The Gold Standard: A Panacea or More Malaise?