Much has been made of the recent spate of government bailouts of private corporations. While these actions often spur short-term spending (as would dropping money from a helicopter) and can sometimes be popular moves with the public, economists generally believe these to be a band-aid solution: helping failed companies/industries prevents the economy from producing goods/services in the successful industries where they are most needed.

So should the government do nothing to help alleviate the negative effects of recessions? Not quite. A solution that still results in short-term spending increases but also allocates resources appropriately is one that provides for worker retraining. Government spending should be geared towards helping workers educate themselves so that they can help themselves as well as companies desperate for productive workers. To demonstrate the general need in the US for better trained workers, consider the unemployment rate for various levels of education: 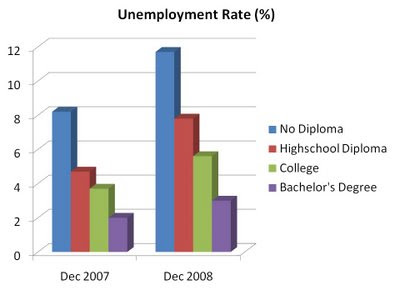 The unemployment rate for those with at least a bachelor’s degree is clearly far below the average, both in good times and bad. Furthermore, this chart covers only unemployment rates, not salaries, which we’ll look at in a future post.While the number of post-secondary education graduates increases every year, the government should be focusing its spending on accelerating this process. Laid-off workers and unemployed workers should be offered the aid they need to increase their productivity and hence return to the work force in a position to make larger contributions to society. The opportunity is there; here are the compositions of the labour force by education level: 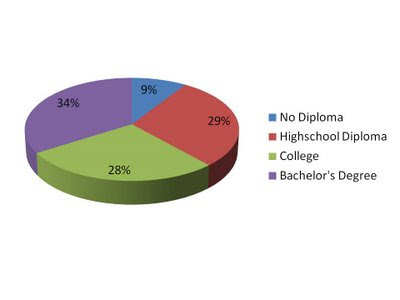 With 38% of workers showing no college education, both these workers and the economy stand to benefit from spending that encourages education.