Bankruptcies In Prior Recessions

The recession of 2001-02 is considered a relatively mild economic contraction. In a previous post, we saw evidence of why that might be by comparing unemployment data across several recessions. Another interesting way to compare recessions is by looking at bankruptcy data. Here’s a look at business bankruptcies each year (year end: June) for the last quarter century: 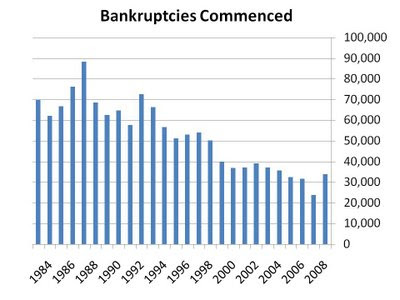 Once again we see that while there was a slight uptick in business bankruptcies in 2002, it was nowhere near levels of previous recessions.

While the current bankruptcy level seems low, recall that the year end for this data is June, and things took a dramatic turn for the worse after that. It will be interesting to see quarterly data as it comes out, and it should not be surprising to see 2009 levels reach those not seen since the early 1990s.

This data doesn’t tell the full story, however. The magnitude of the bankruptcies are not shown; for example, a Lehman Brothers bankruptcy has far more impact than that of a small business, but this data does not account for this. Furthermore, changes to bankruptcy laws over time have change incentives for businesses to file, and therefore makes the data more difficult to interpret. Finally, this only includes business bankruptcies, and excludes consumers bankruptcies, which we will look at in a future post.