The markets responded to Cisco’s earnings report by gapping the stock price higher. In general this means that there is upward pressure on long-term yields as well as a reasonable trend for the dollar.

Below is a comparison between 10-year Treasury yields and the share price of Cisco (CSCO).

Cisco ‘gapped’ higher last August right in front of the start of dollar strength and a week or two ahead of the absolute peak for gold prices. This past March Cisco ‘gapped’ to the down side as yields moved to new lows.

To the extent that stock prices ‘gap’ on unexpectedly positive or negative news there tends to be some follow through in the direction of the gap in the ensuing weeks. The chart argues that 10-year yields trend with Cisco which suggests- to us- that yields look higher.

The comparison below shows Goldman Sachs (GS), the spread or difference between platinum and gold futures prices, and the share price of Carnival (CCL).

The spread between platinum and gold tends to go with yields so it was not too surprising to see platinum futures prices rise by more than 3% in trading yesterday. The share price of Goldman Sachs has been leading the rally by moving up from the 90 level so, in the absence of a return to crisis mode in the Eurozone, the path of least resistance for platinum and yields appeared higher.

The share price of Carnival is rather intriguing in that it is a difficult stock to classify. Some view it as part of the consumer sector although we argue that it is more of a cyclical. The last time the cyclical trend shifted from negative to positive (in 2003) Carnival went on an upward voyage as its share price tripled into 2005.

The point is that if, as, or when the markets shift over from defensive to aggressive we would expect to see a fairly steady rise in yields along with a return to relative strength by the economically sensitive stock markets sectors. 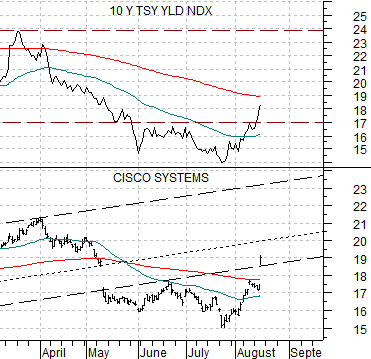 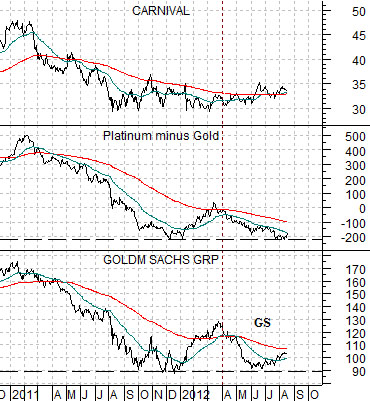 We have been showing negative perspectives on the bond market for some time but have been reluctant to ‘stick a fork’ into it until the yen started to weaken against both the dollar and euro.

Below is a comparison between the cross rate between the Japanese yen and euro along with the U.S. 30-year T-Bond futures.

The point is that the yen/euro cross rate broke the rising support line in trading yesterday confirming the weakness in the TBond futures.

The argument is that as long as the TBond futures trade above the 200-day e.m.a. line (around 144) the trend is still somewhat ‘defensive’. Obviously bond prices are falling rather rapidly back to the moving average line but the first serious test for support still lies ahead.

The picture that we have in mind for the bond market looks something like the Hang Seng Index from 1997. The chart below shows how the Hang Seng Index busted down to the moving average line in August and then held the line into the end of the quarter.

While the TBond futures still have considerable work left to do the comparison to Hong Kong in 1997 has some appeal to us. In theory this could lead to the TBonds moving back into the mid-120’s by the fourth quarter of this year or into the initial quarter of 2013. The markets have tended to focus on expanding growth through the first quarter of each year so it might make sense to look for upward pressure on yields into the early spring of next year. 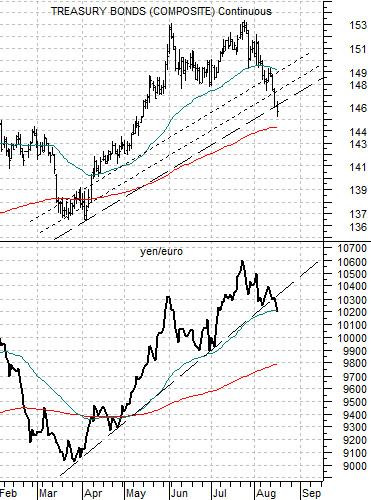 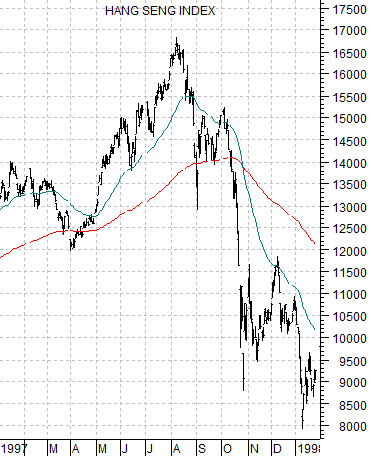 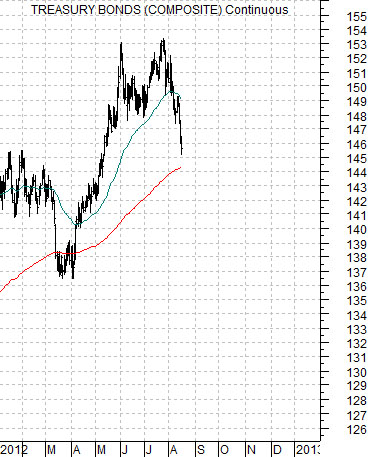