Lucky to be in the green today. After making a really successful first trade, I simply chased plays and made too many transactions. I saw the chance to turn my paper trading record from red to green and just got impatient and pushed things. Six trades, two longs, four shorts: $101 profit minus $72 in commissions, 50% success rate.

I shorted C when it broke $4.00 in the morning. Entry at $4.01 and average exit at $3.89. It broke down much from there. I traded GNW three times for a wash. MPG a short that worked and DDS one that didn’t. The back drop to this was I was ready early on to make a couple trades like shorting ESLR at $3.01 (tends to have highs in mornings) and CWTR at $3.15 (hitting this resistance level again) – both really tanked later in the mid-morning swoon, which I really wasn’t positioned to take advantage. Things I want to keep in mind:

1) Today I paid too much attention to the overall market rather than tracking individual stocks – too many of my plays were about thinking the DOW or financial sector was reversing.

2) Don’t hesitate on pulling the trigger on proven signals (crosses, green to red, former runners, high highs or lower lows, overextended at resistance, etc.) but pass on trades that just are not ideal (coming late into a move, entering side ways action, guessing bottoms, etc.).

3) Let winners run, taking partial profits at my price target; leave my stop orders in place and don’t over-ride them. If I pick good set-ups, these rules are even more important because those plays tend to run more and are less likely to go against me.

4) What happened yesterday will not necessarily repeat itself. In the sideways action mid-day, I kept looking for a quick bounce like yesterday.

Here is my set of entry and exit rules I’m trying to follow:

I’m not sure if this will work, maybe I’m risking too much for not enough profit and I suspect that for these gutter stocks the stops may be too tight. Right now, I just want to SEE IF I CAN FOLLOW MY RULES! Here is what it would of looked like on the C trade. 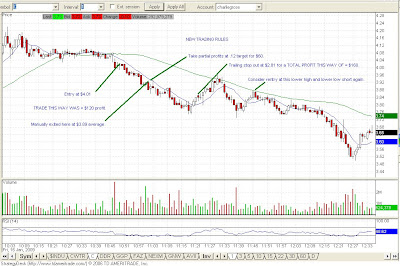