For years, the American consumer has used his credit card to finance purchases he couldn’t afford. At many points in the last few years, he was spending more than he was earning! Clearly, this is not a sustainable situation. Finally, however, tighter lending standards combined with a lack of consumer confidence has resulted in a reduction of outstanding consumer debt, according to the Federal Reserve ($ millions): 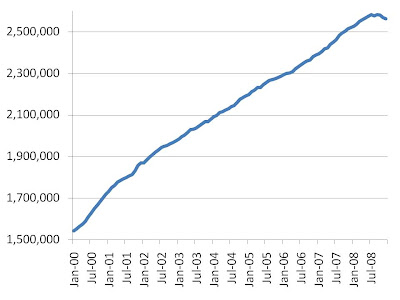 The drop in debt in late 2008 doesn’t seem like much compared to the run-up that preceded it. This is why many believe this recession will be a long and protracted one, with consumer debt having a long way to go before it returns to a more sustainable level: instead of spending on gadgets, consumers use their money to pay off debt, which reduces demand and thus lowers output (GDP).

On the other hand, however, lower interest rates (thanks to the Fed) make it easier for consumers to pay off debt and still have money left over. Furthermore, the drop in commodity prices (including gas prices) should also help ease the strains on consumers as we saw here.

Finally, when consumers pay off debt, it induces the lender to take on a new customer. While this multiplier process is not as quick or as high as it is for consumer spending, it results in increased investment (at the expense of consumer spending) due to cheaper capital which, according to economists, leads to stronger, sustainable, long-term growth, despite the short-term pain.