Last week, we took a look at how investors can determine how much money the companies they own have been spending in order to lobby the government. While companies must also disclose the specific bills and the government departments on which they have spent money, this does little in the way of informing investors as to the returns on investment that lobbying efforts have ceded.

A reader of last week’s post pointed out that financial returns have been shown to correlate with lobbying efforts. Indeed, a paper by Chen, Parsley and Yang (2008) from just a few months ago attempts to illustrate this correlation (the full text of the paper is available here).

The authors examine lobbying expenditures in a similar manner to those of R&D: while they are classified as current accounting expenses, they may be expected to yield future profits. Using regression analysis, the authors concluded that firms with higher lobbying expenses do show higher income and cash flow.

So does this mean you should look for the companies that spend the most on lobbying and buy their stocks? Not quite.

First of all, while the expected value of income may be higher for firms that lobby more, this doesn’t mean all high-lobby firms will perform better. There is variability in the returns which is explained by other factors unrelated to lobbying, so you still have to do your research!

Secondly, there is a possible flaw in the cause and effect relationship between income and lobbying. It could very well be that firms that see an impending increase in net income are looser with the purse strings (more company trips to Vegas, more unneeded hiring, and more lobbying).

Finally, a company which lobbies is also more likely to be committing fraud. A paper by Yu and Yu (2006) found that fraudulent firms spend 77% more on lobbying than firms which do not. According to the paper, this lobbying for fraudulent companies buys them an average 117 more days before they get caught, but probably isn’t the type of investment shareholders are looking for!

As an interesting excerpt from the Chen paper, here is a ranking of the largest lobbying spenders in millions in 2005 (click the image to zoom in): 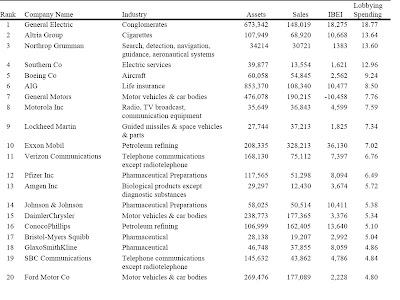