Despite My Short Ring Finger

What a day. I finally made some paper money! $463 minus $144 in commissions on 12 trades, 8 longs and 4 shorts. I was worried when I woke up that I had little hope as a trader when I read about this study claiming that men with longer ring than index fingers may make better traders.

The morning was slow as I was convinced there was going to be a dead cat rally or corrective bounce. It came in the afternoon. Even though I had such a good day, I left a lot of money on the table. Tons. I longed F and GNW around 2:00pm and they both rallied much higher after I took profits. Here were all my trades for the day:

In chat, I gave my first alert that panned out pretty nicely. Someone else may of mentioned it earlier in the day, but I didn’t see it. AAI was crossing $4.00 going red to green on the day with a 10/60 SMA 5-minute cross in a sector (airlines) that was already racing up. My first mistake was typing an alert up in chat room before entering. So my entry was a nickel late @ $4.07, and then when it did a pull back, I was afraid of losing the $100 profit I had on the day, so I played not to lose rather than to win. So when it snapped back to $4.08, I sold it feeling grateful for the $10 profit rather than a loss. Look what happened after: 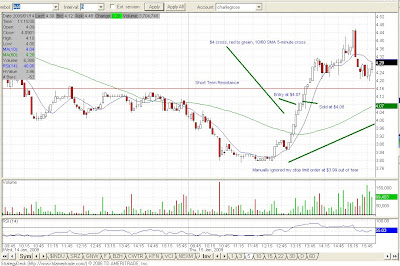 Despite my mistakes, today was great – everyone of my picks worked out but my entries and exists are what I have to work on. I was able to trade the whole day and made the most trades I have ever done. In the morning, I hesitated on an early entry on GTCB despite it being a potential bio-tech runner with news, and also did not short ARUN when it did the same spike as HEV. My GNW trade was lucky to make money because I accidentally only sold only 100 of my shares when I wanted to close out the 1,000 shares in another panic on a pull back (need to trust my stop orders). I got better with this as the day went. Also was stalking DDR alot but missed its $1.00 rally. And Think or Swim Paper Money locked up this afternoon, so I had to use Think Pod to exit my afternoon shorts. This could of been a disaster with the afternoon squeeze that happend with my 3pm short plays.

Last, I’ve changed a couple of my paper trading rules:

1) Instead of flipping a coin to see if shares are available to borrow for shorting, I go to Interactive Broker’s website and look at there list here. A couple times stocks were not available or listed so I couldn’t short them.

2) I mostly trade stocks between $1 and $3, but sometimes up to $5 and sub buck pennies as well. I decided to universally do transactions at the 1,000 share level. This is a nice round number with a $100 profit for every .10 cents in the direction that I want. Keeping things at this scale makes it easy to calculate risk and reward, doesn’t over expose me to risk, and makes me less stressful (sometimes I would buy 2,500 shares of penny stocks). It also lowers my average commission cost. At an IB rate of .006 per share, it makes the average round trip trade around $12, much better than the $20 to $25 range of Think or Swim.

Now, I have to go try to stretch out my fingers!