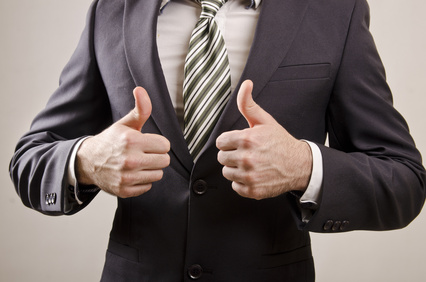 Despite the lack of broker approval, short option trading can be a high probability strategy

In last month’s article, we focused on the risks and challenges of short option trading, but now let’s center on the positive.  The primary advantage of an option selling strategy is its ability to generate profits regardless of market direction.  Further, an option seller can be wrong in regards to market direction and still make money.  It is the only strategy that I’m aware of that offers such a high margin of error.  Likewise, the odds of making money on any given trade are rather high.  Generally speaking, an option seller anticipates to make money on anywhere from 60% to 90% of trades.  This is dramatically higher than most futures trading strategies which generally produce win/loss ratios of 50%, or worse.  Similarly, long option traders might be lucky to win 10% to 20% of their trades.  With these stats, it is easy to see why some traders are lured to an option selling strategy.

Naturally, a strategy that provides traders with such high odds of success on each venture must come with some sort of caveat…and it does.  Losses on the few losing trades can easily engulf any profits made on the winning trades.  Hence, it will take careful consideration and planning to successfully implement a short option strategy.

Unless there is an obvious direction, sell strangles

Selling both a call and a put, known as a short strangle, is a method of increasing the premium collected while arguably increasing the odds of success.  The favorable odds come from the fact that the trade can only lose on one side, but preferably neither. Risk exposure on one side of the strangle is partially hedged by the additional premium collected on the other side of the strangle.   Simply put, the break-even point is shifted outward making it less likely for the trade to lose money (with all else being equal).  With that said, not all market conditions are ideal for strangle.  For instance, a market trading at an all-time low is prone to massive buying should the trend change.   On the other hand, if there is no trend-change one directional trade could also put the short strangle in jeopardy.   The ideal market to sell an option strangle is one that is neither at support nor at resistance, is not overbought nor oversold, and has a relatively equal probability of going either way.

Use 50% or less of your available margin

Option sellers can experience drawdowns whether or not the futures price ever reaches the strike price of their short option.  This is because as futures market volatility increases, or the futures price moves toward the strike price of an option, the market might consider that particular option more valuable.  Consequently, price discovery might assign the option a higher value than the original sales price.  Sometimes spikes in option values are quick, and temporary; riding out the ebbs and flows requires extra funds in a margin account.  Those attempting to sell options using the entirety of their account balance could find themselves forced out of positions prematurely and unnecessarily.

Wait for big spikes in volatility

If you have ever read a book on trading commodity options, you’re likely aware of the simple rule of being an option buyer when volatility is low, and a seller when volatility is high.  However, we often underestimate the value of this rule.  Selling options during times of high volatility equates to collecting more premium than is possible in a low volatility environment, or selling similar premium using options with distant strike prices.  Each of these scenarios increase the probability of a favorable outcome relative to a comparable strategy in a quiet market because it would require the futures price to move further to create a losing scenario.

On August 18th, a trader could have sold a straddle (an at-the-money call and an at-the-money put) using the October expiration for about 170 ticks per option; this equates to $2,125. In other words, the total straddle could be sold for $4,250 ($2,125 x 2).  On August 24th, a straddle could have been sold for 180 ticks, or $2,250 per option.  This equates to $4,500 in premium collected per straddle.  Keep in mind, that options generally erode over time so the fact that the same strategy (an at-the-money-straddle) is worth more nearly a week later is significant.   With that said, on a trade such as this a difference in premium collected of $250 might not be a game changer, but those selling out-of-the-money strangles will see a massive advantage.

A strangle trader, who sells out-of-the-money options as opposed to a straddle trader, looking to collect 60 ticks in premium, or $750 on August 18th could have sold a 1.155 call and a 1.055 put.  Keep in mind, a strangle trader reaps the maximum profit if the futures price is between the strike prices at expiration.  In this case, the trade would be profitable by 60 ticks, prior to consideration of transaction costs, at expiration if the euro is anywhere between $1.155 and $1.055.  If you’ve done that math, you’ve realized this provides a max profit zone of 10 cents (1,000 euro ticks), which is quite substantial.  However, had a trade waited until the 24th to sell a strangle for 60 ticks, she would have been able to get the premium she was looking for by selling the 1.2250 call and the 1.1050 put, this expands the profit zone by 200 euro points!  The second version of the strangle now offers the trader a max profit zone of 12 cents, or 1,200 euro ticks.  Naturally, the wider strangles increases the likelihood of success and dramatically reduces the probability of a high stress trading venture. 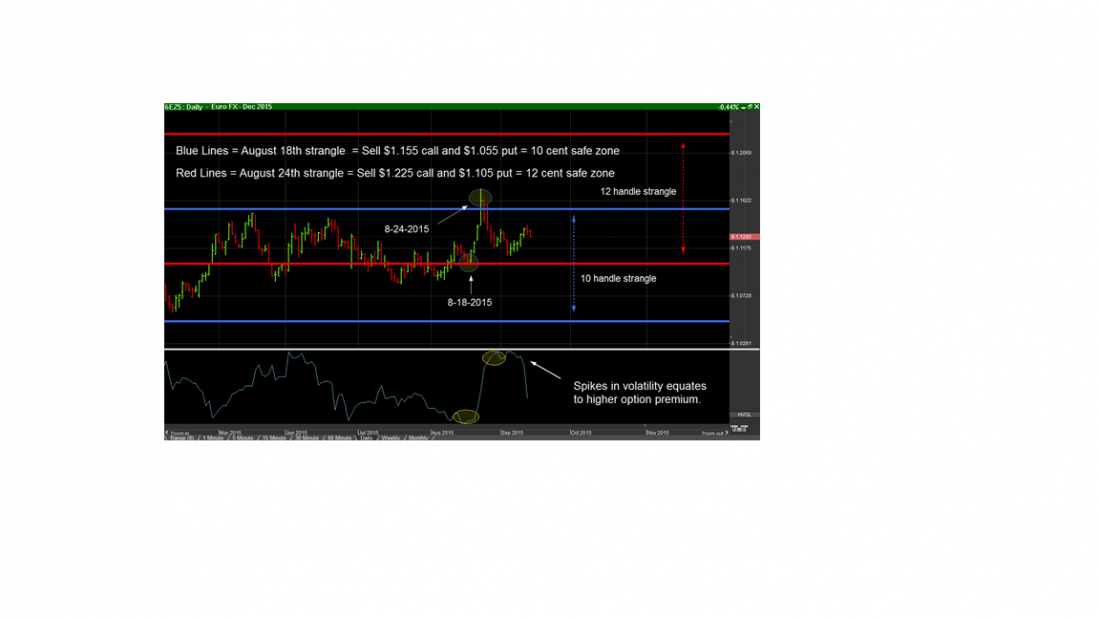 Sell options with strike prices beyond support and resistance

Essentially, an option seller is collecting a premium in exchange for the risk of the underlying futures market trading beyond the strike price of the short option.  Placing the strike price of any sold options beyond known support and resistance sounds like an obvious strategy, but it tends to be overlooked as traders seek more premium and disregard risk.  Nevertheless, proper strike price placement is a very effective way of shifting the odds favorably.

Most markets have a particular direction in which they are capable of the most explosive moves.  For instance, the stock market tends to take the stairs up and the elevator down.  As a result, put options tend to be relatively expensive when compared to calls in the e-mini S&P 500.   Even more so, S&P puts are prone to massive panic pricing in a volatile down-turn.  However, S&P calls generally don’t have an explosive pricing nature.  Crude oil and the grains, are typically the opposite; they have the potential to move higher faster than they can move lower.   Knowing this, extra caution should be warranted when selling puts in a quiet S&P environment, or calls in a quite grain market.

Option Selling is not for everybody due to the prospects of theoretically unlimited risk.  Yet, it is a strategy that everyone should consider in light of the high probability of success on any particular trade.

Carley Garner is the Senior Strategist for DeCarley Trading, a division of Zaner, where she also works as a broker.  She authors widely distributed e-newsletters; for your free subscription visit www.DeCarleyTrading.com.  Her books, “A Trader’s First Book on Commodities,” “Currency Trading in the FOREX and Futures Markets,” and “Commodity Options,” were published by FT Press.