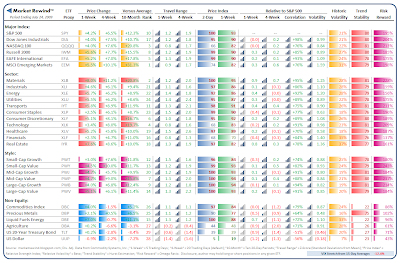 Given the major indices’ largely overbought status at the end of last week, I was especially curious to see how this week’s table would compare after the strong re-pricing encore. As shown above, further gains left the S&P500 (SPY) up another +4.2% for a (mere) four week increase of +6.5%.

Short-term mean reversion signals can be very unreliable during re-pricing moves like this where risk and opportunity are rapidly reconsidered, effectively causing a technical reset. However, by almost any measure, this one has been a whopper. Of the tracked equity ETFs, six now have RSI-2’s pegged at 100 with another 13 well above 90. Indeed, the SPY’s RSI-2 has put in nine consecutive closes over 90.

This is a very, very rare occurrence indeed. While the move leaves us more and more susceptible to some sort of pullback, intermediate-term studies continue to suggest better than average odds of further advances ahead with analogous periods predictions twenty weeks out suggesting SPX ranges from lows of 910 to highs of 1,070.

Also, while the magnitude of this two week +11.4% move certainly came as a surprise to many, recall that the analogous March move actually had us +12.5% higher with the ensuing week higher yet again. In fact, during the past 50-years the S&P500 Cash Index has recorded eight two week moves of +10% or greater. The table below identifies these moves and the ensuing week’s relative highs, lows and close. 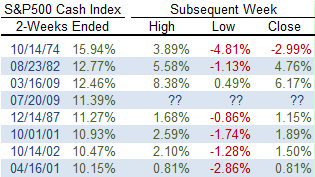 To close, note in the RSI charts below how the NASDAQ 100, which led us higher, finally experienced a relative pause this Friday — well see if this has any significance soon enough as an added push occurred in the aftermarket. Leading Financials (XLF) have also been a touch weaker on a relative basis. Have a Terrific Weekend! 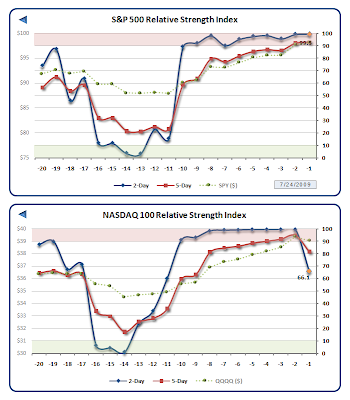 If you are interested in a significantly more thorough version of this weekly summary, consider taking a look at Market Rewind’s new nightly ETF Rewind Pro service (free trial). In addition to coverage of over 170 ETFs across twelve major asset classes, you will find three model portfolios, daily market signals and commentary, pairs trading and various portfolio management tools.