A Zigzag is the most common corrective structure, which starts a sharp reversal. Often it looks like an impulsive wave, because of the acceleration it shows. A zigzag can extend itself into a double or triple zigzag, although this is not very common, because it lacks alternation (the same two patterns follow each other). Notice that the zigzag can only be the first part of a corrective structure.

Rules and guidelines;
It is composed of 3 waves.
Waves A and C are impulses, wave B is corrective.
The B wave retraces no more then 61.8% of A.
The C wave must go beyond the end of A.
The C wave normally is at least equal to A.

Most of the time it happens in A, X or 2. Also quite common in B waves as a part of a Flat, (part of) Triangles and sometimes in 4. 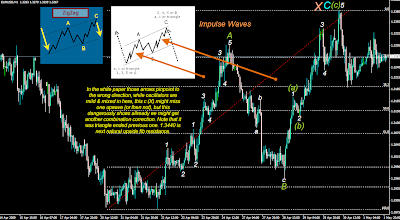 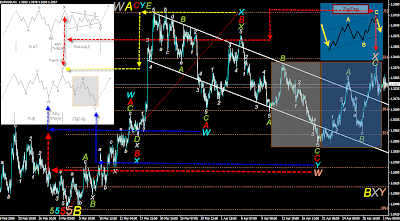