The Euro was confined to narrow ranges during Tuesday with markets unable to find any fresh incentives. Technical considerations were important and there was also evidence of option positions being defended towards the 1.2450 area.

The Euro-zone data was generally downbeat with Italian GDP declining by 0.7% for the second quarter, the fourth consecutive contraction, while there was a 1.7% decline in German industrial orders.

The Italian data will risk increasing domestic political tensions as domestic protests against economic policies increases. There has also been a significant increase in tension between Germany and Italy which will risk destabilising political mechanisms for strengthening the Euro area. There was a renewed increase in Spanish bond yields following recent sharp declines which curbed Euro buying support. The Spanish government also indicated that it would not seek any sovereign bailout if further conditions were attached.

German political developments will also be watched very closely as there is still a high degree of opposition to the ECB bond-buying plans with the potential for additional cases being sent to the Constitutional Court. Eurogroup head Juncker stated that a Greek Euro exit was manageable although not desirable. In this context, underlying confidence in a definitive solution for the debt crisis was dampened.

There were persistent doubts surrounding the US economy and regional Fed president Rosengren called for additional Fed action to boost the economy. The comments tended to undermine the US dollar to some extent and risk appetite was also relatively firm which dampened dollar demand.

The further sharp increase in Swiss reserves fuelled expectations that the National Bank still had a substantial amount of Euros to sell and there was a retreat to test support below 1.24 against the dollar. 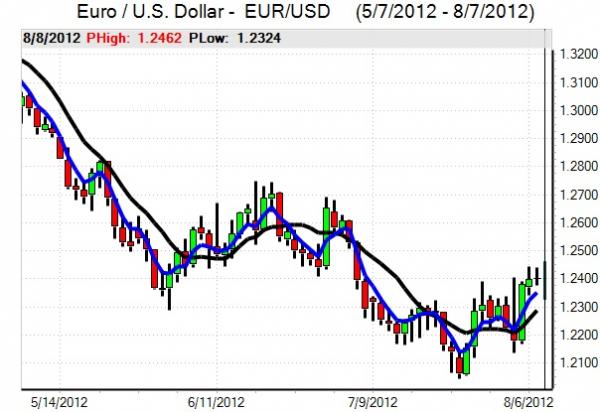 The dollar was able to find support in the 78.20 region against the yen on Tuesday and pushed steadily higher during the day with a peak in the 78.70 area. The yen was undermined by a solid tone on global stock markets as risk appetite remained firmer.

The current account surplus was slightly stronger than expected at JPY433bn for June, but the underlying market impact was limited.

There was some further speculation that the Bank of Japan could move towards additional easing at Thursday’s policy meeting. Expectations of global monetary action prevented heavy selling pressure on the yen. Risk conditions were slightly less favourable during the Asian session on Wednesday which curbed any further yen selling as the dollar retreated back to the 78.50 area.

Sterling pushed to a high near 1.5680 against the dollar on Tuesday before retreating back towards 1.56 as the US currency recovered from lows and Sterling also failed to sustain momentum against the Euro with a further suspicion that defensive inflows were fading.

The latest industrial production data recorded a sharp monthly decline of 2.5% for June following a 1.0% increase the previous month, but a weak outcome had been expected given the influence of official holidays.

The NIESR report was relatively weak with the economy estimated to have contracted 0.2% in the latest three-month period which will undermine expectations of a significant recovery for the third quarter as a whole.

The latest Bank of England inflation report will be watched very closely on Wednesday with expectations of a downgrade to both the growth and inflation forecasts which would continue to fuel speculation over additional central bank action within the next few months.

The dollar found support just above 0.9650 against the franc on Tuesday and moved back to the 0.97 area while the Euro was contained back near 1.2010 after the previous day’s spike. The potential for capital inflows from the Euro-zone remains a key market focus.

The latest National Bank data recorded a further increase in reserves of over CHF40bn for July, only slightly less than the decline seen the previous month and this continued to illustrate substantial pressure on the Euro minimum level. The Finance Ministry continued to back the bank policy and stated that unlimited intervention remained possible. 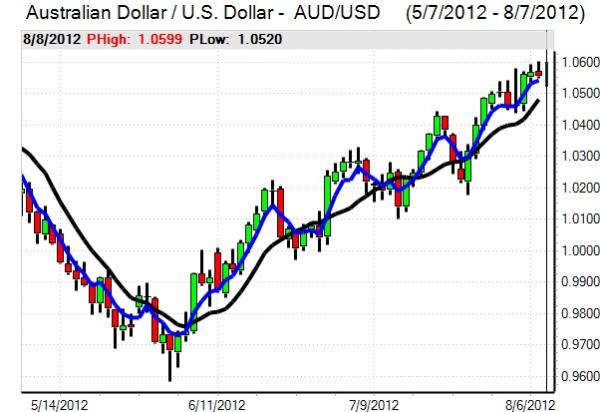 The Australian dollar retained a generally firm tone during Tuesday, but was unable to break above the 1.06 level against the US currency.

There was speculation that the Reserve Bank would intervene to curb currency gains, especially with growing unease over potential over-valuation within the regional economy.

There was a more cautious tone surrounding the regional economy on Wednesday which curbed Australian dollar buying support and the currency edged back towards the 1.0530 level.