Well, old calculation in the post below fits for this as well, just with different wave structure to end first ZigZag, but I am calling triple ZigZag now, meaning also more bullish with commodites. I draw originally this multimonths triangle wrong first, it´s fixed now in my 240 min chart explains it.

Friday action at 1,4162 top  – as projected weeks earlier, likely ended third wave of the first impulse of Y wave, while 1.4262-1,4272 projection should bring fifth of first for it. My monday chart with SPX 880 was likely also end of small correction with equities also, there´s bullish, inverse HS with sideways triangle.

It´s overall view in here, note that my Gbp-Jpy chart somewhere in lower post is also double ZigZag working with major Y up wave. However, there´s reason to be very carefull when first part of ZigZag ends as double, if it´s only double there would be nasty correction ahead (=see my earlier posts & calculations). I would call triple to come, then this party is over.

1,4700 is just below 3 years chart 61.8% retracement, but it also comes from calculation, if we multiply red W with 1.618 it pinpoints there. With much larger perspective there´s WX pattern behind in the pips history from 1,2500 bottom to end double ZigZag as previous calculation points, at least to breake the chart for correction.

Seems that this festival is going to end anyway – just a slightly further, but expensive pips still left ahead , but it also seems we have much larger sideways progress ahead before real dynamic impulse takes the price again. D is next to the lower part of the triangle.

One issue & timeframe at time, I still do agree with my previous post also. We will take something down from there, but it´s important I noticed this triangle structure correctly now, I have a clear clue where EuroDollar stands now as EW position. 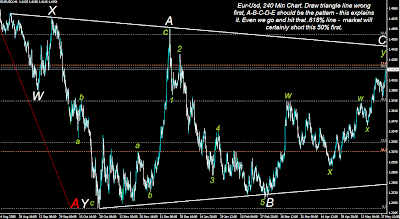 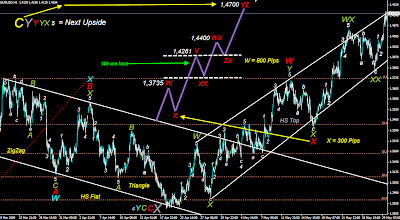