Fixed Costs Not So Fixed

We have always advocated that investors seek out future operating lease payments that a company has agreed to. Under ordinary circumstances, these payments are fixed obligations, like debt payments, and should be treated as such. (For a discussion of why this is the case, see here.) Under the exceptional economic malaise with which we are currently afflicted, however, lessors appear willing to allow lessees to re-negotiate these contracts, even for financially healthy lessees! 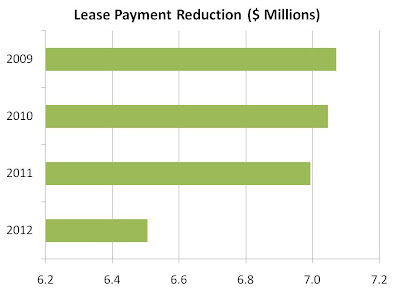 By my calculations, this changes BBW’s debt to total capital from 64% to 57%, and reduces its lease payments for 2009 by an amount greater than BBW’s entire net income for 2008!
If these had been debt payments instead of lease payments, would BBW have been able to reduce the amounts so drastically? Unlikely, as this is not a company in dire straights: assuming even a catastrophic shortfall in revenues in the near future, it currently has enough cash on hand to cover lease payments for the next year.
It appears that owners of assets (e.g. land/building/mall owners) are willing to share the pain of this recession with even healthy tenants, perhaps to build goodwill or for competitive reasons. Investors should be on the lookout for companies that have been able to reduce their cost structures, even when it appears that those costs are fixed!
Disclosure: None