Following My Rules Not

1) Do not buy into morning spike.
2) If at least two of these conditions are met (news, higher volume and/or former runner) buy at first pull back when price bar crosses back to the upside over 10 SMA on 1 minute chart – unless pullback is at resistance level.
3) Set initial stop order at .5 cents under the pullback low.
4) Follow my overall trade exiting rules (see below).
5) Do this over and over again until I obtain enough information to see if this works. 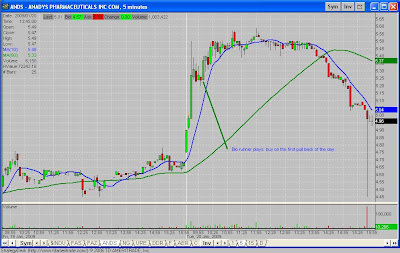 1) These rules are not for scalps where I am looking to make $100 or less with a quick play of less than five minutes; these are for trades that have clear Muddy method trade entry signals (10/60 SMA crosses, half-buck or dollar price thresholds, red to green or green to red, bouncing off resistance or support of a day ranger, etc.)
2) Set initial stop order to be .06 from purchase price and behind a threshold mentioned above.
3) Stay in trade and do not consider exiting unless initial stop order is met or until a full body of a price bar (not a wick) crosses 10 SMA on 5 minute chart.
4) Confirm exit only when a 10/60 SMA cross on the 1 minute chart accompanies a full body price bar cross on 5 minute chart.
5) Follow these rules each and every time to determine if its working. 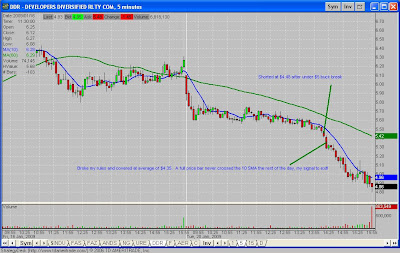 I shorted BLC into close; chart shows a recent pattern of swoons in the morning with highs in the PMs. The day range of this recently has been around $1.89 (resistance) to $1.68 (support). I will take a $100 profit on this one unless there is a giant market hemorrhage tomorrow.