The Euro was unable to break above the 1.2385 area against the US currency during Friday and retreated back towards the 1.2330 area during the European session.

There was a stronger than expected trade surplus for June with a headline figure of EUR10.5bn from EUR6.8bn the previous month as exports were stronger than expected. The current account data was also stronger which provided some degree of support for the Euro on speculation that underlying capital flows would improve.

In contrast, there was a further increase in Spanish bad bank debts for the month which undermined sentiment as markets continued to speculate over a sovereign support package as part of the ECB plans to intervene in the bond market. The currency was unable to break resistance levels and weakened further during the New York session with a decline to lows below 1.23.

There was continuing uncertainty surrounding the Finnish situation with further speculation that the government could consider leaving the Euro area if there was a further pressure on financing peripheral economies. Although Treasury bills issuance allowed Greece to make a debt repayment due on August 20th, underlying funding pressures continued and Greek Prime Minister Samaras will continue to negotiate with Euro-zone officials this week.

The latest US Michigan consumer confidence index edged higher to the 73.6 area for August from a revised 72.3 the previous month which was the highest since May, although the underlying ranges have been relatively narrow.

The Euro moved back above the 1.23 level and over the weekend there was speculation that the ECB would look to cap peripheral yields at a set level which in theory could expose the bank to unlimited intervention. The Euro edged higher to the 1.2350 area in Asia on Monday before drifting weaker. 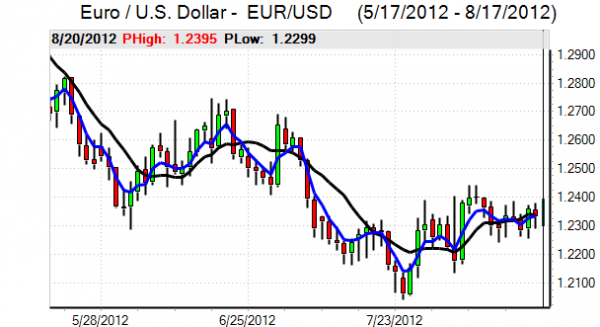 The dollar found solid buying support on dips towards the 79.30 area on Friday and pushed higher during the day with a move above the 79.50 area, although underlying ranges were relatively narrow as the Euro found support below the 98 level.

There will still be pressure on the Bank of Japan to weaken the yen further through an easing of monetary policy, especially if there is underlying depreciation for the Chinese yuan. Uncertainty surrounding the Euro-zone also curbed yen selling to some extent with the dollar unable to make significant further headway on Monday. 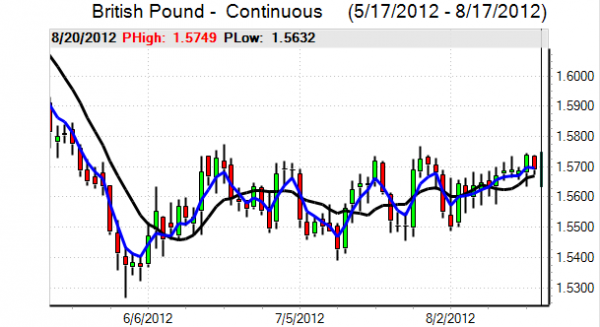 Sterling hit resistance close to the 1.5720 area against the US dollar on Friday and pushed weaker, but did find support above 1.5650 as underlying selling pressure was contained while the Euro found support just below the 0.7850 level.

There was a slightly more optimistic tone surrounding the UK growth outlook with some expectations that the second-quarter GDP data would be revised significantly higher.

There was still a high degree of uncertainty surrounding the situation and overall sentiment was still very fragile, especially with uncertainty surrounding the Euro-zone economic and political outlook. Euro developments will be watched very closely during the forthcoming week and any renewed political tensions could trigger renewed capital inflows.

The dollar pushed to highs around 0.9765 against the franc on Friday, but was unable to hold its best level and dipped back towards the 0.9740 area later in the US session as the Euro was trapped in familiar territory near 1.2010.

There has been some speculation that capital inflows into Switzerland have eased on hopes that the Euro-zone will be able find a workable solution and that pressure on the Euro minimum level has also eased slightly. Markets will watch any reserves data very closely for actual evidence over the following week.

The Australian dollar continued to drift weaker during Friday and dipped to lows around 1.0410 with little in the way of recovery recorded later in the US session. The currency continued to be unsettled by doubts surrounding the global growth outlook and declines in key export commodity prices.

The currency was able to make some headway during the Asian session on Monday as risk appetite was slightly stronger. There was still underlying caution and there was also a further increase in speculative long positions which will make it tough to sustain gains