Another green day, so progress, but I left a lot paper profits on the table – I entered these trades without hesitation, now I have to let the winners run. Four trades, 1 short overnight and three longs for a total of $160 in profits minus $48 in commissions. My overnight short BLC went sideways all day, and I was very patient with it but exited when the entire market looked to be going up and its price spiked a couple pennies really quick in the early PM. The DOW was making higher highs and lows since midday and I sensed the Obama rally or market correction with a short squeeze may go into close, so I entered three longs around 3pm: DDR, UYG and BEE. Nice calls, horrible job on bailing on these positions once again, not following my rules, especially with DDR. My post from yesterday had very clear EXIT rules (note to Charlie)!

1) These rules are not for scalps where I am looking to make $100 or less with a quick play of less than five minutes; these rules are for trades that have clear Muddy method trade entry signals (10/60 SMA crosses, half-buck or dollar price thresholds, red to green or green to red, bouncing off resistance or support of a day ranger, etc.)
2) Set initial stop order to be .06 from purchase price and behind a threshold mentioned above.
3) Stay in trade and do not consider exiting unless initial stop order is met or until a full body of a price bar (not a wick) crosses 10 SMA on 5 minute chart.
4) Confirm exit only when a 10/60 SMA cross on the 1 minute chart accompanies a full body price bar cross on 5 minute chart.
5) Follow these rules each and every time to determine if its working.

DDR met the criteria as a non-scalp because it crossed $5 and has a history of running a half buck when it gets past a mark. A price bar never crossed the 5-minute 10 SMA so there was no reason to leave. I didn’t get shook out when it went under $5 (which would of been a safer place to enter as they often pullback like that after the first cross) but got faked out like 20 minutes later when it dropped to $5.05 and spiked to $5.11, so I took my measly $60. It almost closed at $5.50. 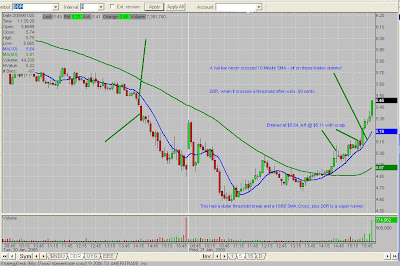 BEE and UYG (a mini “FAS” by the way) were not as bad as my entries with them were more about going with the momo of long candles than classic Muddy technicals and once they stalled a little, at that stage grabbing some profits with them is ok, but these went up some more as well. 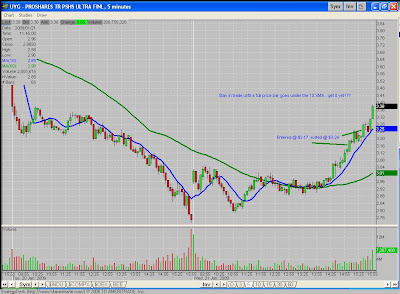 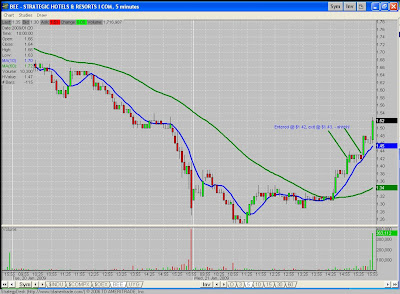 So a week and half ago I was hesitating to enter, now I just need to stick in them to see what happens.