As brought up by a comment from Matias, it is sometimes interesting to compare the historical P/E ratios of market competitors to understand how Mr. Market thinks. The Home Depot (HD) and Lowe’s (LOW) have been competing in the home improvement retail space for decades. Here’s a look at their P/E’s over the last few decades: 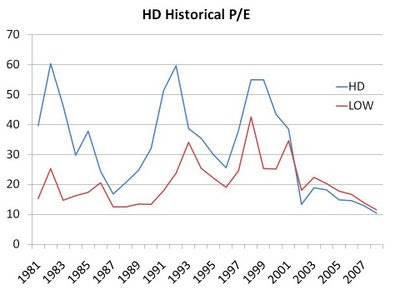 Clearly, HD has been the market’s favourite for most of the last 30 years. HD was growing its store count and thus its revenue at a faster rate than LOW, and this is a major reason why. However, as we discussed here, investors tend to overpay for growth. The fact that HD has not been near its 1999 high of $70 suggests this may have ocurred here as well.

In the last few years, however, it is LOW that has enjoyed a more generous valuation as far as P/E’s are concerned. With HD’s declining retail operating metrics (relative to LOW) and growth into other businesses like building wholesale, the market’s taste for this company soured. HD has since sold its supply business, ousted its much maligned CEO (who is still maligned at his new company, as we saw here), and brought a stronger focus to its retail operations. As such, the P/E’s of these two companies are now quite close.

What is most clear from the chart, however, is that this industry is currently out of favour with the market. Last time these companies saw these valuations was during the last real-estate crash (which we explored here). As such, investors are not asked to pick a winner, but are instead offered both companies at low historical prices, allowing for the possibility of long-term returns in the home improvement retail space, without the risk of reliance on a single company.

Disclosure: Author owns a long position in both HD and LOW