One of the most important determinants of whether a company makes for a good long-term investment is the industry within which it operates. We’ve discussed the boom and bust nature of the housing industry, the generous margins garnered by the soft-drink industry giants, and reasons why airlines make for poor long-term investments. But on the average, what do industry returns look like?

Harvard Professor Michael Porter, using data from Standard and Poor’s as well as Compustat, has calculated the profitabilites of various industries over the 1992-2006 period, some of which are shown below: 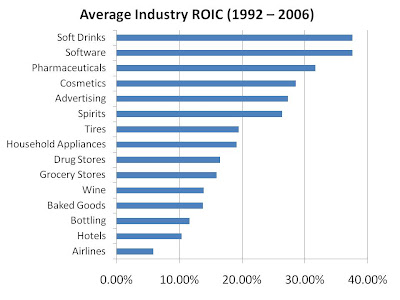 Clearly, there is high variability in returns on capital by industry. Average industry ROIC in the US was calculated at 14.9% by Porter, demonstrating that some industries are clearly extremely profitable, while others destroy capital.
Does this mean you shouldn’t own a company whose industry returns fall below the average ROIC? Absolutely not! Within industries, returns may also be highly variable, in the case where one or two companies have differentiated themselves or are low-cost producers that generate consistent industry-beating returns…but you may still want to stay away from the airline industry!