It is important for value investors to understand the cyclical nature of the economy so that they can make objective investment decisions at all times, rather than fall prey to the psychological biases that overcome the market during periods of recession and exuberance. Economists believe most recessions are caused by temporary drops in demand. Until businesses reduce output, this results in increased inventories. Businesses react by cutting output to a point that reduces inventories such that they are in line with the now reduced demand. Once this process is complete, the economy is once again ready for expansion, as barring another reduction in demand, businesses will no longer have a need to reduce output.

While the economy has not yet reached that point, it appears businesses have now cut output to a point that inventories are being depleted. The following chart illustrates the US business inventory to sales ratio over the last business cycle as reported by the US Census Bureau: 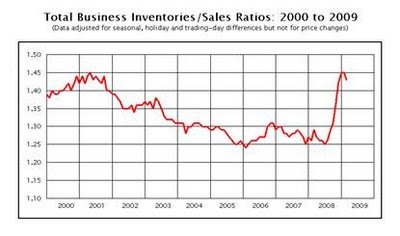 While the inventory to sales ratio is still high (meaning firms will still try to cut output, which does not bode well for employment rates), it appears that businesses are now selling more than they are making, as the inventory to sales ratio has started to drop. Firms can enjoy these cash inflows for the time being, but obviously this is not sustainable. Eventually inventories will have to be replenished, and that is when we will see GDP expansion return.
Clearly, this same phenomenon occurred in the last recession, and the peak inventory to sales ratio is remarkably similar. What is different this time is the ferocity with which demand appears to have waned, causing a large spike in the graph in late 2008, which resulted in large output cuts which manifested itself in some of the staggering country GDP drops observed in the last quarter, such as that of Japan.
When the inventory to sales ratio changes, which is more dominant, changes in sales or changes in inventory? It actually depends on which part of the business cycle we are in. In a future post, we’ll break this graph down into its two components to better understand exactly what takes place.