When demand for products drop, as they invariably do during recessions, firms do not simply hold their inventories stable. Firms instead cut inventories (keeping their sales to inventory ratio relatively stable), which amplifies the economic effect of reduced demand. Therefore, production is not just reduced by the actual drop in demand, but is further reduced by the desire to hold less inventory, which takes a huge bite out of GDP.

Incidentally, the opposite happens when demand increases: production is increased to a level higher than that of demand, resulting in a glut of product when demand starts to wane. We saw this process in action when we looked at the history of housing production, for example.

Here’s a look at US manufacturing inventory over the last several decades, as compiled by the US Department of Commerce: 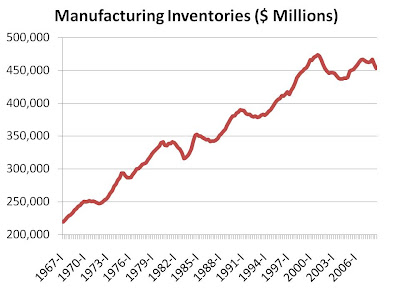 Notice that during economic down cycle years (e.g. early 80s, early 90s, early 2000s), inventories can be reduced by upwards of 10%. On the other hand, boom times result in tremendous inventory increases.

This chart takes us to Q3 of 2008. As demand continued to wane in the fourth quarter of 2008, companies have been focusing on cutting production and reducing costs. As such, it is likely we will see a large drop in inventories when we see look at chart again once data from Q4 of 2008 is included.

When you look at the balance sheets of the companies you are analyzing, take a look at their inventory levels and you will likely see this process taking place at a micro economic level.