Without valuing a single stock, it is often possible to determine the extent to which Mr. Market is offering companies for sale at large discounts. Various signals and indicators may be used for this purpose, and we’ve discussed them previously including TED spreads, margin debt levels, P/E levels in the aggregate market, and what Warren Buffett calls “the best single measure of where valuations stand at any given moment”: the ratio of stock market values to Gross National Product.

Another useful indicator that demonstrates the level of fear currently prevalent in the market is Initial Public Offering (IPO) activity. When companies are willing to go public, it is because they
are being offered generous valuations in the public markets. When such valuations are not so generous, private companies will tend to sit things out and wait for better conditions.
Below is a chart depicting IPO activity over the last several decades: 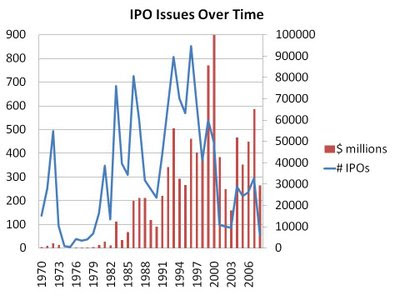 Note the drops both in the number of IPOs as well as their aggregate values during recessionary years such as 1990 and 2002. Also note that 2008 numbers are 80% lower in volume, and more than 50% lower in value than they were in 2007 (and that value number is skewed upwards in 2008 thanks to the abnormally massive Visa IPO that represents 60% of the total IPO value in 2008!).
The fact that private companies are staying away from the market suggests that they are not receiving market valuations enticing enough to their present owners. Since private companies looking to IPO are often valued by comparing them across several metrics to similar public companies (e.g. Google would have been compared to Yahoo using Price/Sales, Price/Cash Flow etc.), that suggests that public companies are also selling at a discount! For those who buy when the market is fearful and sell when the market is hot, it would appear from many of the indicators we’ve looked at that it is a great time to buy.
Source: PriceWaterhouseCoopers IPO Watch