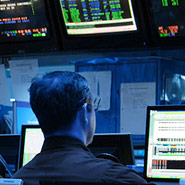 We’ve all heard the “experts” preach to us that we should only take trades which offer at least a 2:1, or better yet a 3:1 reward to risk ratio and on the surface this seems like sound advice, but is it really?

I used to be one of those educators who would jump on the risk/reward bandwagon until one day when I stepped back and took an objective look at what trading is and how I can best optimize my chances of success. When I did this I realized that not only was the whole risk/reward premise false but that it had the potential to ruin chances for trading success by keeping me out of some of the best trades.

YOUR WINNERS CAN RUN….IF YOU LET THEM

The proponents of risk/reward ratios say that in order to be successful the trade must out produce the amount of money you have at risk by at least double or triple your risk amount but what they fail to take into consideration is that the reward side of any trade is unknown.

You see the only part of the trading equation that you have any control over is the risk side of the trade. The reward side of any trade is a complete mystery. Oh sure, we all have our best guesses as to where the market might go next, but in the end it’s really just a crap shoot. Sometimes we’re right and sometimes we’re wrong and if we’re honest with ourselves we will admit that we really don’t know where the market is going next.

If we don’t really know where the market is going, namely the reward side of the trade, why would we even include it in our trade scenario never mind making it the deciding factor of whether to take a trade or not? Obvious, right? Yet in spite of this I continue to encounter traders who insist on only taking high risk/reward trades thinking that they are being smart investors by doing so.

The truth is the risk side of a trade demands much more consideration than the reward side. Successful traders know this. They know that the market will move much more/less than they ever expect it to and controlling your risk exposure and taking what the market will give you is far more important than basing a trade on some “pie-in-the-sky” profit target.

LEARN FROM THE LEGEND

Consider this quote from Paul Tudor Jones, one of the most successful traders of recent times:
“Where you want to be is always in control, never wishing, always trading, and always first and foremost protecting your ass. That’s why most people lose money as individual investors or traders because they’re not focusing on losing money. They need to focus on the money that they have at risk and how much capital is at risk in any single investment they have. If everyone spent 90 percent of their time on that, not 90 percent of the time on pie-in-the-sky ideas on how much money they’re going to make, then they will be incredibly successful investors.”

For most traders a proper position size means risking less than 2% of their trading capital on any single trade, but in general anything less than 5% of your account is considered prudent. What is important to realize here is that the risk amount remains the same on every trade. This means that the number of contracts changes, not the size of the stop. Did you get that? Regardless of where you place your stop; whether you have one point or ten points at risk the dollar amount remains the same; but the size of the position changes to keep your 2% risk exposure constant.

This should be a very liberating concept for most traders. Knowing that your risk amount stays constant allows you to place a wider initial stop so as not to strangle your trade in the beginning when choppiness and a wandering market are most likely. Compare this with the old risk/reward mindset which normally demands extremely tight stops in order to maintain a favourable ratio but by doing so you are setting yourself up for early failure if the market doesn’t immediately move in your direction.Paul Tudor Jones has it right and if you take the time to think about it you’ll see that basing a trade on a risk/reward ratio, where the largest part of the equation is a complete unknown, is foolish at best.

Yes, Mr. Jones has it right but the bigger question is: are you listening?

[Editor’s note: What risk/reward rules do you use? Let us know with a comment below.]