I have to put on my “Pattern Police” hat and rant about the VIX. While I am not entirely sure patterns, support and resistance mean anything at all on this indicator, let’s assume they do for now. With today’s action, a possible breakdown is on its way to being negated. 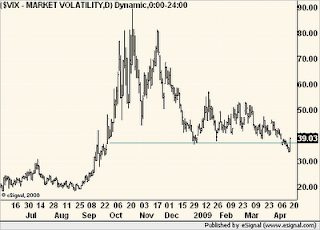 Here’s how I drew it. Note the possibility that there was more than one touch of the line to make it a valid level. Now check this chart I saw someone else draw and swear that a new up-leg had begun. 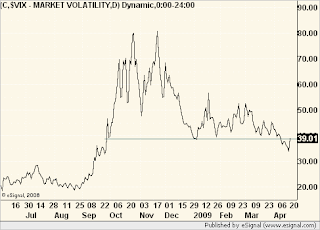 In this version, using only closes, which is perfectly valid for normal instruments, the line is similar to mine only a few points higher. But do both versions really present solid chart pattern construction? Do either make a strong case for a support level in the VIX other than one “lowest low” point back in January?

Nope. So to become more bullish (as of Friday) than during the meat of the rally based on a “breakdown” in the VIX is nuts.

The VIX measures zones of fear and not trigger levels unless at extremes. 40 today is not an extreme. And for traders, the VIX measures something to be used for a reversion to the mean approach – a la Larry Connors.