Microsoft has constantly come under fire in the last several years. It has ventured into less profitable areas, used monopolistic business practices, and is receiving a public thrashing from Google in search technologies. However, no one can dispute the fact that this company makes money hand over fist.

Despite the economic downturn, businesses and individuals alike require Microsoft software to increase their productivity. Both revenue and operating profits in 2008 were almost 20% higher than they were the previous year. But the company’s stock price hasn’t been this low since early 1998. It’s P/E has never been lower, as shown by the following chart: 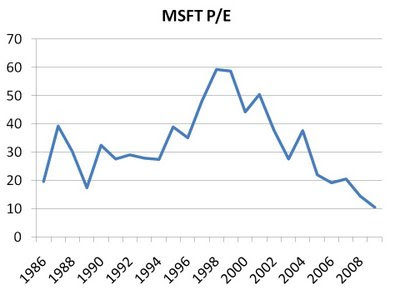 The company carries no debt and holds over $20 billion in cash. Even though PC sales may slow in the short-term, it’s hard to believe that a company with the low financial risk and the global reach of Microsoft can have a P/E under 10.