Last week, Microsoft (MSFT) reported quarterly earnings not that different from those of one year ago. Revenue was up 2%, while operating income was down 8%. MSFT decided to cut 5,000 jobs, and announced a large expected drop in operating expenses in the next six months. So from a profit point of view, things aren’t too different from what they were one year ago. The stock, however, trades at about half of what it did one year ago.

Does this represent a buying opportunity? A quick look at MSFT stock reveals a characteristic fairly unique to Microsoft as compared to its peers of similar market cap: its large cash position. Microsoft carries far more cash ($21 billion) than it does debt ($2 billion)! When one subtracts this net cash position from MSFT’s market cap, one is left with a $134 billion company with no debt.

So what is a buyer getting for that $134 billion? MSFT’s trailing P/E is just 7.5 after taking into account all that cash. Is it a company in decline? Don’t believe all the anti-Microsoft hype! The company has a strong position in a growing and lucrative international market, as seen by its revenue and net income growth in the last few years ($ billions): 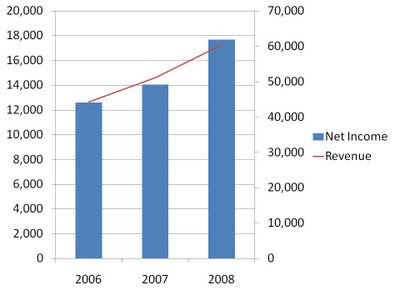 MSFT hasn’t traded at this price in 10 years, despite gigantic profit growth in that time. The sale currently taking place in the stock market is incredible!