Miles Per Gallon On The Rise

When oil prices were out of control in the summer, we discussed how while in the short term oil demand is inelastic (i.e. can’t change much), in the long-term demand would likely drop, leading to a tempered oil price in the long term. Historically, one reason oil demand has dropped when prices are high is an increased focus on developing and purchasing fuel efficient vehicles. Here’s a look at fuel efficiency for the average new passenger vehicle over the last two decades. 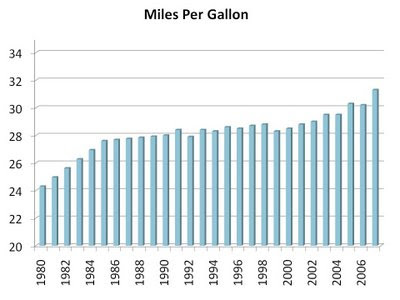 Clearly, the high oil prices prevalent in the early 80s resulted in a surge in fuel efficient technologies which helped eventually reduce demand. On the other hand, low oil prices throughout the 90s and early 2000s led to a lack of innovation in this area.

Thanks to the recent high prices of the last several years, it is likely that we will once again see gradual fuel efficiency improvements take hold over the next several years. We see that this has already begun to some extent, with fuel efficiency over the last three years showing marked gains over the prior decade. More efficient vehicles combined with fewer miles driven per vehicle will likely be a major contributor to a drop in oil demand even after this recession.