Military Spending Out Of A Recession

Much has been made of the US Federal debt which currently stands at over $10 trillion. While this number continues to increase as the government tries to spend its way out of a recession, eventually the government will have to cut its spending. One of the largest components of the US budget is its military spend. Here’s a chart depicting US military spend over the last three decades: 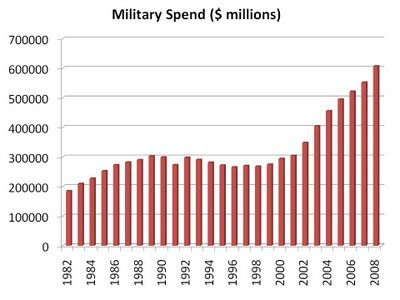 From the chart, we can see that if the US can wind down its wars, it can realistically return to an annual spend around $300 billion. Ignoring inflation and interest for the sake of simplicity, this would save $150 billion per year compared to the last eight years.

Over the next eight years, this would reduce outstanding debt by $1.2 trillion, which represents more than 10% of current debt outstanding. This is more than the fiscal stimulus checks issued earlier this year and the funds allocated to the current bank bailout combined! Getting along with the other cultures with whom we share this planet might not just be good for our health, but also our wallets.