I have written in the past that natural gas is our answer for a potential supply shortage in oil. Natural gas is cleaner than gasoline produced from oil, it is currently cheaper for the same energy output, and it is being produced in abundance in the United States which makes it a good current substitute for potentially stressed oil production. Not only that, but gas reserves are being found in abundance all over the world.

To be clear, oil supplies have kept up with demand owing to new discoveries and technology which has allowed economical oil extraction from sands and shales. It also does not hurt to have high oil prices driving recovery from unconventional sources now made profitable. But if global demand keeps growing at current levels, at some point in the future a supply deficit may emerge in oil which will require alternatives to balance energy demands. Please read my analysis of current oil supply and demand factors for background.

While natural gas meets the needs for a fuel alternative to oil for the foreseeable future, detractors of natural gas have pointed out that petrochemical production, which in the past have been largely dependent on rich, liquid-heavy content that oil provides, cannot be met by the lighter hydrocarbon profile that natural gas provides. This article will examine the potential petrochemical content provided by natural gas contained in Natural Gas Liquids [NGL’s] content.

I will attempt to make the argument that this analysis is not zero sum, requiring us to forego one resource for the other; but rather that both resources together provide an abundance of options for fuel and petrochemical needs.

Understanding the relationship between oil and natural gas for petrochemical production is crucial for investors putting money into any company involved in the energy sector. Indeed, in several future articles we will use this knowledge to assess which companies are the very best candidates to own against the evolving energy landscape. 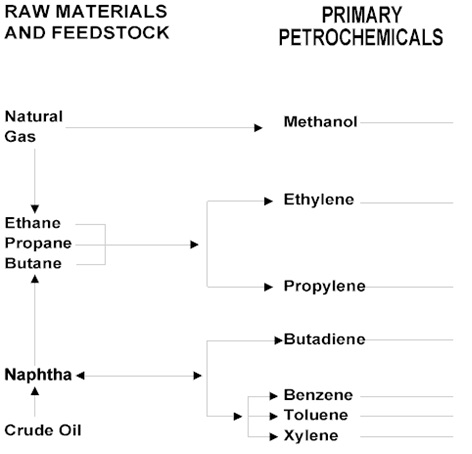 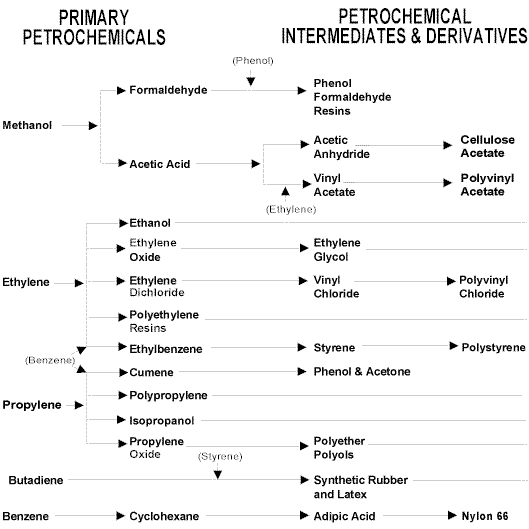 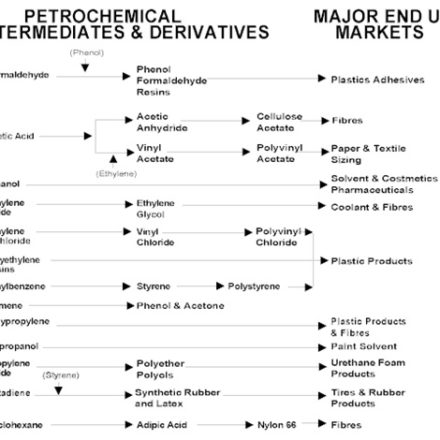 Typical oil cracking leads to butadiene, benzene, toluene, and xylene production while natural gas leads to methanol, ethylene, and propylene production. If we stop our analysis there, then supply issues of one natural resource would imply difficult choices to be made on production of key products. But a deeper analysis suggests that both feedstocks provide a range of petrochemical choices.

These include ethylene, propylene and butadiene and have predominantly been produced by catalytic cracking of oil. However, the build-out of steam cracking faciltiies which process both oil and NGLs into olefins are receiving the majority of funds in the industry, largely in response to the increased role natural gas reserves are playing in petrochemical production.

Butadiene can be produced from natural gas liquids but on a smaller scale than oil-based production, and therefore there is a scarcity premium priced in that market. I’ll get to the importance of butadiene production later [think tires].

Benzene originally came from coal production, but oil’s emergence shifted production so that coal produces a very small amount of the world supplies. Toluene can be used to manufacture benzene, and benzene can also be made from ethylene [natural gas] . A lot of benzene comes from pygas [oil].

Toluene is used as a feedstock for production of other petrochemicals, as an octane booster in vehicles, in solvents, as a component of polyurethane foam, and as a disinfectant. This chemical can be produced from NGLs but the majority share is from oil cracking.

Xylene products include polyesters including soda bottles and fabrics. Xylene can be produced from NGLs, but also predominantly comes from oil.

So which is more important, oil or natural gas? That depends on market factors for each petrochemical product. Typically, oil cracking leads to a more rich diversity of some chemical products, some of which command a premium in the market. Natural gas liquids , however, offer an abundance of supply are are less costly to produce, making them a very attractive feedstock for many chemicals also in high demand in the market.

In addition, it depends on the supply of substitute products. For example, while benzene and xyelne are used in the production of nylon and polyester fabrics, cotton is a viable altnerative fabric that is regaining popularity.

Ethane, in particular, is very cheap to produce from steam cracking NGLs. Ethane produces critical ethylene [and to a smaller extent propylene] which are used in over half of all petrochemical production.

Butadiene, most often used in the production of synthetic rubber, is the one petrochemical in which oil supply shortages can really drive price quickly. While natural gas feedstocks do produce this important chemical, they make a relatively small dent in the overall world demand for it. The market has tried to find alternatives such as natural rubber, soy, plants, and others but none have been perfected as a true substitute for butadiene. Companies that can capitalize on the premium priced into butadiene stand to gain handsomely in the immediate future.

NGLs give us a key choice in feedstocks for our natural gas steam crackers. Part of the debate within natural gas cracking is which feedstock offers more value. Ethane is currently in such oversupply that the market is rejecting some supplies and companies are investing in storage facilities for the gas.

Propane cracking provides a richer portfolio of products which tend to command higher prices in the market. Demand and supply tends to swing from ethane to propane cracking and back again, depending on whether the market needs production of ethylene or butadiene, propylene, etc..

Essentially, we have enough feedstock to satisfy demand and keep a lid on excessive price growth of both of these important petrochemicals.

As the natural gas industry builds key infrastructure and can provide for transportation of the gas and it’s constituent liquids, pressure will be taken off the oil market until the markets for both fuels complement each other.

This will reduce the doom and gloom over looming oil supply shortages and allow us more time to develop technologies outside of these fuels for even longer term sustainability.

A last point to be made is that current use of natural gas stocks as a grid power solution alongside coal, nuclear, solar, and wind will adversely affect supplies of natural gas for transportation and petrochemical products. We consume so much energy on the grid that we can burn through natural gas supplies in very short order. Luckily, the thorium nuclear revolution has come along just in time to alleviate this potential energy problem.