Not Quitting My Day Job II

Some progress today, but still in the red. Commissions are killing me so I’m going to have to go with a firm like Interactive Brokers with my real trading to reduce the hit on trading costs. I made five trades today, so I was a little looser and moving faster/more efficiently. Also started keeping a written journal of notes on particular stocks. Hard to keep it all in my head.

My last trade of the day was perfect with DDS. I spotted the price acceleration on TD Ameritrade’s Motion Detector tool. Watched for nearly 10 minutes as the price jumped between $4.14 and $4.04 on incredibly high volume for this stock. It was clear it was going to pop – wasn’t sure which direction it would go. As soon as there was a shift red, I went in short as many indicators were signaling downside (about to go under $4, 10/60 SMA cross, drop in volume, etc.). Only a $96 profit minus commissions, but the chart was exactly as I anticipated. 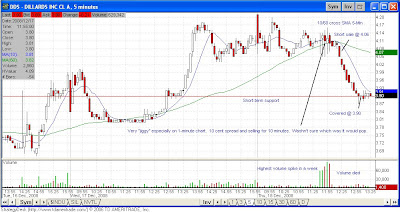 I had a winner on a quick DVAX short scalp dropping 12 cents in 2 minutes. I tried to go long on GNW again, it went above the $3.50 mark and looked to be making a 20/60 cross, but it didn’t continue its upward momentum. HSNI was bouncing up and down today – if you were brave you could trade it up and down. On both my HSNI and NG shorts I got in .10 cents lower than I wanted because they were moving so quick. With HSNI, I was trying to change my order and go long as it was getting “jiggy” on the bid-ask spread and I could tell it was going to “pop”, but I was not quick enough. I was exited out of NG because I typed in the wrong price for my stop order, but I was lucky for this as it spiked minutes later – so I only had a small loss. Still lots to learn.