Not Quitting My Day Job

I’m going to focus on the positive. I got a lot of real work done in the morning and then paper traded a bit from 12:30pm to 2:30pm. Usually, I’m not that disciplined and do the fun stuff first (trade!) – and then take care of the business that I’m actually generating income from currently. So, I’m getting better at juggling this, which is important to sustain both investing in learning and preparing me to make the time to trade with real money when I’m finally ready.

I am capable at looking at a chart and making the right call on what is going on with a stock. This afternoon I was alerted to PAY moving in price using TD Ameritrade’s Motion Detector tool. It gapped up big this morning, but fizzled and then went sideways. It legged down quickly and looked like it had more downside to go. I wanted to short it but no shares were available to borrow (I flip a virtual coin to give me more shorting opportunities that TOS allows with their strict “Hard to Borrow” policy in Paper Money but to still simulate the reality you can’t short every stock you want). I don’t do very many alerts in chat but did post this today: 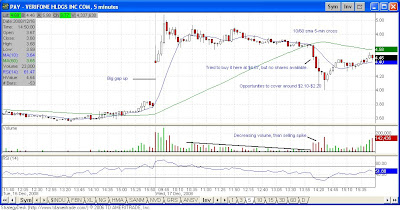 Now, on to my bonehead move. NEXM was spiking, and an alert went out in chat from someone. I have a history with this stock. It was actually last trade I made in my real account; a penny stock I bought and held on message board hype. I was very familiar with it, both technically and emotionally. So I jumped in long with a limit order at .10, but was stopped out at .089 for a $250 loss. Here was what was wrong with this trade:

1) The position I took was way higher than I would take in real life – 25K shares. Though it was within my $2.5k position risk guideline, I only had 10K of this stock with real money because any trade with one penny movement costs $250 is way too risky. But I jumped in with hopes to making quick money, and I lost paper money quickly instead.

2) The stock movement was real jumpy as it was going up and I should of put a order in for .09 and just been patient for it to get filled.

3) I put in a stop loss order at .089 but as in real life (as I talked about in my post linked above) this was executed when the stock was under .10 but still more than a half cent above the stop order. This is because either TOS paper money rounds up, or as with TD Ameritrade, the order was triggered when bids got to the stop level, even if the price didn’t get that low.

4) I knew past support was in the .11 range, and old support often turns into new resistance – so buying at the point I did was taking a chance that it could break through on its first try. It didn’t – but it did later in the day and closed at .13 and traded up to .195 in after hours.

So with a smaller position that would not require such a tight stop, this trade could breath and I could ride it up at a slower pace and make some money. Another lesson learned.