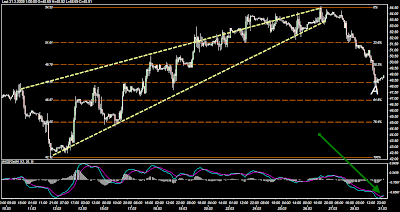 Nice small commodity sell off or should I say correction (called it at 55 $ top) so, I take my credits because it was mostly US Steel, Joyg Mining etc. commodity stocks which sold off during monday “sell” session.

Perhaps it would be time for B upwave again, pretty much in every product including SPX, EurJpy and EurUsd. I don´t think we´re done yet, but likely B wave ZigZag ahead before C wave down comes. In most cases B wave can come pretty complex which takes time, so rest of the week might not be so exiting as monday was, at least for a few next days.

I opened Eur-Usd long position from Asian market hours at 1.3190 and will I´ll leave it run now based for that oil chart plus inverse HS (bullish) pattern in Eur-Usd in 5 minute chart, leaving it ran with extreme tight stoploss at 1.3148.

It looks it broke now 1.3200 critical fib area without no problems. Be carefull with SPX 795-800 area – B wave might end there tomorrow, so, this wave is not a lot of fun and we do have quote a lot very sizy bear flags & pennants available in this market with daily signals, in fact so many of them that I hope my “final tsunami” will not come earlier as I thought, but I don´t think so, those diagonals looks very much as A waves also, meaning B wave corrective down.

1.3200 – 1.3220 tomorrow for european market hours as backtest could offer long setup for Eur-Usd, it´s more than likely monday bottom will be re-tested slightly above. 1.3213 is 50% from current setup because while writing this eur-usd ran allready to 1.3250 level. In fact we need to run much higher to get room to drop again for that smaller C oil wave also – at least my eur-usd work tells that for me in EW terms.

Btw. I updated some of those weekend charts later and will do more of them, individual equites charts by editing that same post, keeping them at the same place.