On The One Hand …

Today is a two-handed day, but before we deal with that, let me just say that the market pattern that has developed over this awesome bull run of the last few years is still intact.

Yup, on the one hand, investors are all about putting money to work and when you have positive and improving economic fundamentals juxtaposed against constant irrational panic in the air, well, one should expect patient buyers to wait for the panic to subside and then buy.

So, the thing that has happened on the way to the forum (again) is the selling exhausted and the buyers are buying to reposition themselves for the next leg up. Is any of this starting to sound familiar?

Yet, on the other hand, an irony is forming in the market that could be problematic for that next leg up. Because the fundamentals are positive and improving, investors are pouring money into US assets, in particular, the US dollar.

Interestingly and somewhat ironically, the actuality of believing in the US economy, and then acting on that belief, could actually end up hurting the US economy, and, thus, the market. It is also interesting and ironic that the Fed Fear Factor (F3), which has driven the market down repeatedly in the last 18 months, is now a reason to invest money in the US.

And therein is the problem – a higher dollar means more expensive US goods for overseas buyers, which could have a meaningful impact on US economic growth.

So, there are both hands of the story. The US economy is underpinning a resilient market, but the fact that the US economy is strong enough to do that draws investors to the US dollar, which then undermines that strength.

Yup, it is crazy out there (in here?) and, sometimes, trying to make sense of it is crazy making. So, here is the deal …

The dollar is rising, but the VIX is dropping, oil is dropping (now in the high 80s), gold is dropping, and the US economic fundamentals are steady and improving. The combination of these factors is keeping and will keep the market resilient, and, although there are clearly differing opinions on this, it is not likely the US dollar will hold its recently attained lofty position, once the economic war between Russia and Europe/USA ends (Europe gets back on track) and the Fed indicates that it will push interest rates higher in a slow (very slow, tiny incrementals, little tiny bumps) and deliberate way.

Now, as to the interesting “stuff” on gold I promised you on Friday … 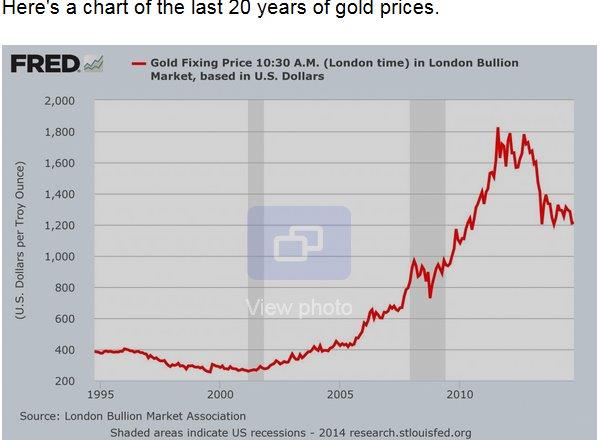 Right now, today, the bulls and the bears in the gold market are fighting right around the $1200 level. It is the Maginot Line, the place where the bulls are making their stand. Given the chart above, it appears the bulls are fighting a losing cause, especially when one considers the aforementioned discussion about the US dollar and all the other stuff tied into that.

Here is another chart (1-year gold) that is interesting, if for no other reason than the blue line showing the open interest in two-month segments is extremely consistent, until now. There is definitely an increased interest in the precious metal. The question is, to what end?