For most companies, recessions reduce P/E ratios, as investors withdraw money from the market and become stingy with their purchases. We saw this pattern emerge when we looked at the historical P/E of the S&P 500. We also saw examples of companies trading at their historic P/E lows here and here. But strangely, some companies actually see their P/E’s increase during economic downturns, and not only those which sell cheap or defensive products. Consider Fedex (FDX).

Fedex is often considered a bellweather for the economy, as when the economy is going well/poorly, Fedex will often see a pickup/dropoff in deliveries. As such, when the economy tanks, one may expect the P/E of FDX to deflate. But here’s a look at what happened to FDX’s P/E during the last comparable recession: 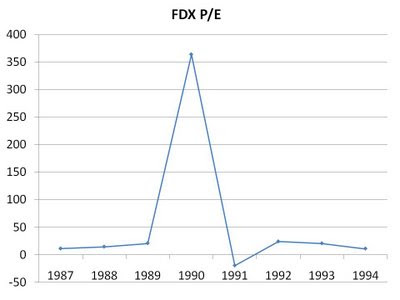 So what’s going on here? The price component of the P/E value did drop to $40 in 1990 from $64 in 1987. But the earnings dropped even more. When this occurs, the P/E may look extremely large, but the company may still be cheap: FDX rose through $76 just 3 years later.

For this reason (and many others which we discussed here), investors should use average earnings when trying to determine a company’s P/E, since earnings of one particular year (particularly a recessionary year such as this one) can be misleading.