Today was good as I had a shorter watch list (PAL, GGP, OSUN, NFE, LEA) to start off with – narrowing my primary focus within the larger pool of stocks in my screener. I added GNW and NGP after seeing they were moving pre-market. I ran the Co-relation Calculator and did the ADR Stockfetcher calculation on all these stocks ahead of time, drawing support and resistance and making notes on each of their charts. Today was an off day from the chat-room – solo flying.

Out of the gates, I looked to short GGP, but no shares were available using my 50% coin flip. The stock did drop about a dime after this point but didn’t make a move down. Later in the morning, I made two trades, finally ending on a profitable note after like 5 losing paper trades over the last week and a half (updated my chart above with the numbers from Friday’s trades too). I still want to ramp up the number of trades I’m making. There’s a little bit of analysis paralysis going on. YNG posts about making 9 paper trades in one hour – while I need more practice, I still need to speed things up.

GNW I am really regretting. I got scared out after two minutes! I didn’t even have time to put in a stop order in…rather manually selling when it dropped 3 or 4 cents after buying. The stock approached $4 by 11:45am. This could of easily been a $300-$400 trade. LESSON: Place my stop loss order and let the trade breath – and not get cold feet after 2 minutes of paper trading. Gees. 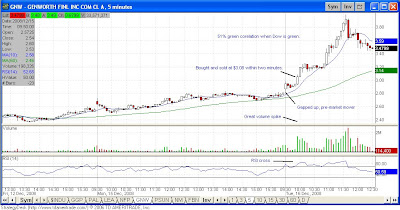 I missed the spike of RVI as a long, I kept watching it go higher and higer and could not believe it went up .45 cents in like 10 minutes. This was after being at $1.20 on Friday. I’m afraid that I did what Muddy warns against doing here about shorting HOD stocks without enough confirmation. At the same time, it seemed like there was triangle forming that Tort talks about at Stack your Cream. 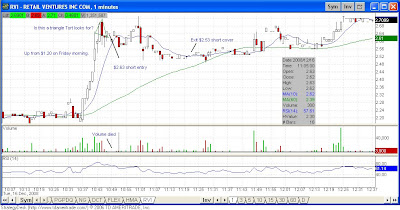 My process was better today, and I was $60 in the green so I am making progress. Going to trade tomorrow afternoon as I tend to do my paper trading in the mornings.