Today’s column on Barron’s Online is about sentiment but not the traditional kind using the VIX, put/call ratios and the like. In keeping with the theme of “technical tools are not working as we expect” (and reminding that fundamental tools are not working either) the piece talked about conversations with money managers and results from surveys. It also talked about the magazine cover indicator, although it did not mention it by name.

Read the column, if you have not already.

Here is an excerpt from this morning’s Quick Takes Pro newsletter:

“Another morning rally and another afternoon decline. That’s been as good as it has gotten in
the stock market lately so what’s another day of heartbreak for the bulls? But actually, it feels more like the bulls have accepted this sort of behavior and while it does not seem like it, this is a form of capitulation.

We are not putting too much weight on it, however, as all technicals are now overwhelmed by the credit crisis. But there will be a point where sentiment is so negative and the market is so oversold that even the hint of good news lights a fire for a rally.

Looking on the bright side, we’ve identified tech as the potential leader. And we still like Mosaic (MOS).

This suggests trimming short positions if you have them to at least avoid being squeezed. Going long at this point seems to be an exercise in falling knife science (bottom picking in a really bad market).”

Not so terrible. But there is more:

What if this bear market ends when everyone stops thinking about stocks? Corrections end with fear spikes. 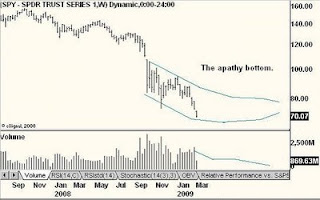 Real bear markets end when nobody cares any more.