I didn’t pull the trigger on any paper trades this morning. I’m still hesitating even with my virtual trading. When I was using real money on the markets in October (and lost about $600), I was fearless, but that was because I was so naive. Now, I’m so keenly aware how hard it is to be a successful trader, I’m a little crippled with a fear that I will fail. This is something I have to get over. The good news is that I’m hopeful that once I get over this hurdle that there won’t be such a challenge psychologically switching to real money, but we will see.

I am spotting very good trade set-ups, more than ever. My challenge is entering once I see something that I have identified as a possible trade. Here are some charts on stocks that I hemmed and hawed about entering, but didn’t take a swing. I am a word person, and very visual – so I’m hoping if I give these charts names, they will be patterns I can look for in the future to see if they repeat themselves.

Gap Down and Bounce – I saw JAVA was way down in price during pre-market, accelerating fast according to TD Ameritrade’s Motion Detector. Recently I have noticed that stocks that gap down often have a dead cat bounce or fill the gap or even go red to green to new HODs – not always but often enough to note. This is usually when there isn’t any apparent news driving the tankage and when the drop is very fast. I drew a line on the chart for recent support and considered entering long for anticiated bounce, which did happen. 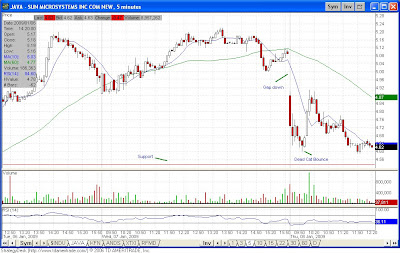 Spiker Hitting Resistance: It’s always very risky to short a stock at HOD, especially when it recently crossed the a dollar or 5o cent mark ($2.50 here), and had a 10/60 SMA cross to the upside on the five minute chart (yesterday). A month ago, I would of played this long, but once I drew a resistance line, I was fairly convinced it would do a turnaround not a breakout, especially on this first test of this resistance, though I didn’t think it would fall so quickly. I hesitated and before I knew it was tanking so I didn’t want to chase the short. Later, after it stopped, I considered reentering long for the bounce up as it looked to be heading red to green and then try $2.50 again. I didn’t play it either way. 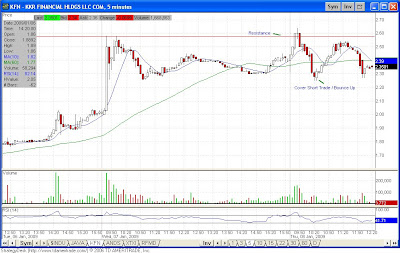 Pre-market Biotech Runner Pullback: ANDS was up a buck in pre-market and is on my biotech watch list. Recently, I have been buying these on their morning high as a long play, and then get stopped out when they pullback. Today, I told myself to wait for the pullback, but I didn’t buy at my unrealized paper profit agony! There was volume and news to justify a continued potential run up. And if you buy on the dip, the risk is less because it will usually retest its morning HOD at least once more, and if doesn’t breakout there, you can either get a small profit or get out before any great loss. 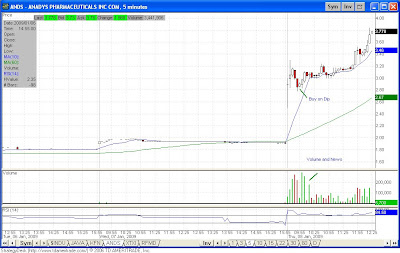 Midday News and Volume: RFMD is very similar to ANSD but it spiked in the middle of the day on news with volume.The challenge is that sometimes they peak by the time you see them, and the stocks under a $1 don’t run up a far as more expensive stocks. I usually take out 2,000 shares of this priced stock, which can mean real profits fast, but if the price goes against you, then every dime costs you $200. I’m mulling over taking out only 1,000 share positions on these so I don’t have such scared money! 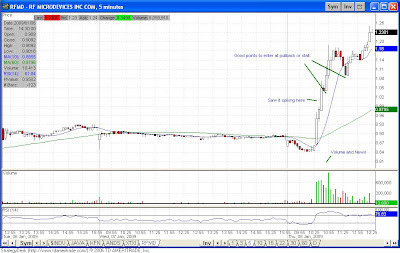