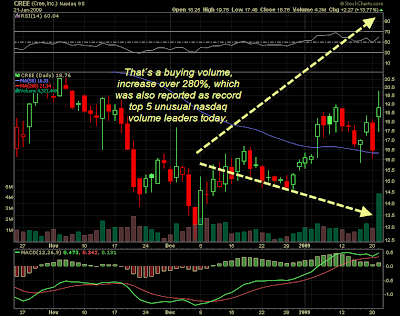 Could be that CREE will reach SMA200, which would give price 21 $, but I suppose this starts to be enough (after all it was pretty good reaction from inverse HS pattern, even it was very large large daily candle range in percentage terms).

It seems SPX took another hit later today after some recovery was done, while market reaction was pretty agressive to the upside much later, I suppose that 1/5 was placed during afternoon. Very last fifth looks to be a truncated or it was similiar size as it reached another touch to the 800 area.

If this is the case now we should starting getting very different kind of waves as what we have seen at so far during last 2 monts because it would mean we had left that boring wave 4 behind of us. In natural order we would be working now with new 2 (if my count is correct). If previous top as SPX 940 would get broken to the upside it invalidates my count.

Asian markethours offered Eur-Usd 1.2950 while writing this, it´s 50% fib correction what it advanced during late night US rally since new year 2009 bottom. This is for scalper tales long setup as market is now much more unsure how far this SPX W2 leads us (or what is new wave setup), perhaps fibs starts to work again in shorter timeframes also meaning 40-50 pips scalping should come more easy. I bet there´s a real lot of positions stopped recently during basically freefall from 1.4700 to the 1.2830 level.

In generally if we consider that SPX W3 ended during 2008 (with SPX 740) where recover as W4 started – I can easily imagine over 13 different scenarios how this is going to be played out before we reach end of this sepaku wave, but it would not be first time while upside W2 or W4 takes very large daily & agressive daily movement, we saw these last autumn very offen and there was no guarantee that next day would follow it – quote opposite. One alternate could be also that 5/1/3 ended at SPX 800 and there would be 5/1/4 progress now which would lead 5/1/5 next, it all just depends how many EW timeframes we look (there´s 13 of them).

However, the difference is that we don´t have EXTREME bear setups now available by pattern site of view (at least I haven´t found) and I can still also find plenty of decent bottom setups,
CREE was one good example.

I am extra carefull anyway next weeks , because when this, perhaps complex wave 2 would be over, next downside impulse would not be one I would like to hold as it would mean 3/5. However, at least one good news is that in my lower chart smaller W3 extended allready in very first wave 1, so this fifth should not do the same as it looked allready it came very short today – theory by itself seems to work, it just difficult sometimes to apply for production.