Stay Ahead of the Stream: Social Media Analytics

In 2007 Ken Fisher wrote a book called The only three questions that count, Investing by knowing what other’s don’t. In chapter four he gives an example of how back in the 70’s he stumbled across a new way to evaluate a stock’s value by mashing together publicly available information to create a metric called “price-to-sales.”

Fisher mentions that he utilized this evaluation method quite often, and with great success. He attributed his success with utilizing this metric around two points. The information to create the metric was not easily obtained (although public), and this technique was not widely known or utilized by traders.

In 1984 he wrote a book called Super Stocks where he shared the idea of utilizing this metric, along with his documented success. As you probably already know by now, the rest is history. Traders picked up this evaluation method and it now appears next to other cornerstones of evaluation such as P/E, Market Cap, and EPS.

Fisher found success because he was able to trade on information other people weren’t using, even though the information was publicly available to everyone.

Today, it is possible to be a Ken Fisher, however the publicly available information we have access to now (that few are utilizing) is Social Media stock sentiment data.

Now I’m not talking about just reading your favorite Trader’s Tweets or Facebook wall, I am referring to taking a macro level approach, utilizing System’s Engineering to roll up hundreds of thousands of Social Media messages about each stock and seeing what the data is telling us.

To illustrate this example, I have selected a stock (Zalicus Inc – ZLCS) based upon Social Media Stock metrics provided at HedgeChatter.com.

The first step in the process is screening out stocks that do not have a large social media footprint by measuring the number of social media messages that are being published.

Typically out of the U.S. markets there will be 400 to 500 that have enough messages to apply language and sentiment filters against to derive more information. However sometimes just being able to track Social Media stock chatter volume is enough to gain an advantage over other traders.

After pulling out the stocks that do have the most message content available, the next step is looking at rollup’s of influencer inputted sentiment (recommendations of strong buy, buy, hold, sell, or strong sell) and influential word counts within the message itself to gauge a positive or negative direction. ZLCS was identified after containing a high volume of messages that displayed a high ratio of both strong buy sentiment, and a positive influential word count.

Now that we have confirmed that the thousands of social media messages surrounding ZLCS are mostly positive in nature, and contain strong buy sentiment, we perform a quick check utilizing a diversity metric to ensure that all messages are not coming from a few sources.

Lastly we look for repeatable patterns within the metrics that have been accurate in forecasting price moves. For ZLCS, over the past 30 days there have been three spikes in chatter volume that have accurately forecasted upward price movement (see below chart), with a fourth spike in chatter volume just occurring on 26 and 27 AUG.

Social Media driven stock fluctuations can occur and end quickly, so with any trade driven by these types of metrics be sure to trade like a professional, and lock in your gains immediately even if they are only between 5% and 10%.

Take advantage of Social Media Stock Intelligence Metrics now to help you make better trading decisions before they become widely discounted into the market. You never know, in five years, some of these intelligence metrics could be showing up right next to P/E, Market Cap, and EPS on your trading platform.

Disclosure: I have no position in ZLCS, and have no plans to initiate any positions within the next 72 hours. 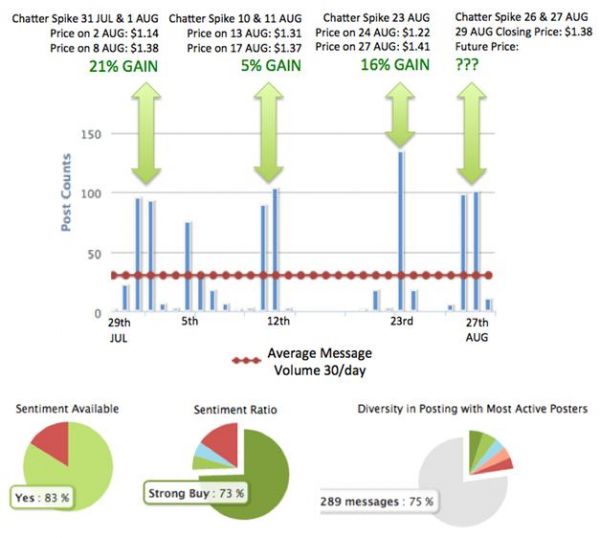