Finally the official results are in!

Oddly enough, it was MUCH worse than the original indication that started this leg of our rally when we were told that every bank passed the stress test but the results were skillfully leaked in dribs and drabs interspersed with rumors that things were much worse in such a way that there is a general sense of relief that “only” $75BBn of additional capital must be raised and almost half of that by Bank of America, where $34Bn represents just 2% of their assets (although it is 40% of their current market cap).

While that level of dillution will keep us out of BAC for now, there’s no reason to not invest in C, who “only” need $5.5Bn against their $2Tn in assets although that is still 25% of their current market cap. For the banks that do need capital,they have until June 8th to present a plan for raising it and until November 9th to implement the plan, which must maintain the target capital ratios through December 2010 after which we can assume they will again be allowed to run wild. The banks are all coming up with various schemes to raise cash but the ones on the left need none at all.

Rather than go into a huge explanation about each pick, I’ll just say that I’m favoring banks that I feel have room to run and have not already been overbought. I discussed with members yesterday that it is ridiculous to assume that banks will get back to their 2007 levels as those earnings came under unique and ideal market conditions which are not likely to be repeated in the next decade so I was disgusted with Cramers BUYBUYBUY rant on the banks last night and I’m looking for a far more conservative play and we will be shorting some of the high flyers as Cramer herds his sheeple into overvalued positions. 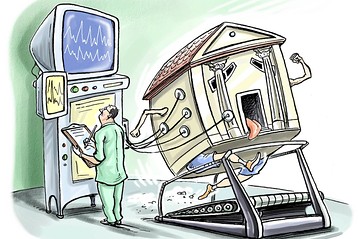 We got out of our bullish bank plays this week and our $100K Hedged Portfolio, which was focused on financials in round 1, made huge gains and we (contrary to Cramer’s advice) took them off the table. Now that we have FACTS, we can reinvest with more confidence. I am not advocating jumping into all of these positions ahead of the weekend, we still want to see stability next week but we can scale in by selling puts on those banks that sell off as…
END_OF_DOCUMENT_TOKEN_TO_BE_REPLACED