The Best Month To Buy Stock

Before starting I should say that I am not a fan of market timing, I think trying to plot an irrational event rationally is next to impossible. However, having said that, if you have the choice between two options both with equal merit why not pick the option with a track record of previous success? In my case the question is, should I get my tax forms prepared early and wait for the final forms to arrive next month and then send in, or wait until the final forms arrive before I start putting everything together.

I thought it would be interesting to see what month has historically had the highest average rate of return for a one year investment in the DOW. 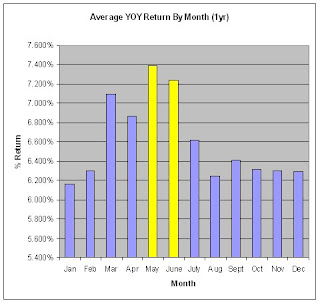 This Chart can be read then to say that if you took a sum of money and only ever invested it on every May 1st (from 1928-2008) into a DOW index fund and then withdrew it May 1 of the following year you would see an average rate of return of 7.4%. Whereas if you had done the same but invested on August 1st you would have seen a 6.2% average rate of return. 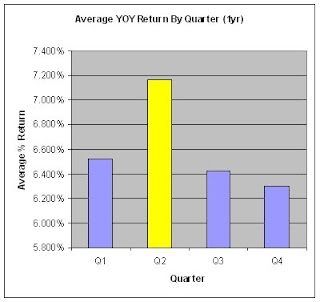 On a quarter by quarter analysis then Q2 has the highest average rate of return. Followed by Q1, then Q3, and finally Q4.

Being a value investor I wondered, does the picture change at all if the investment changes from a one year to a five year investment? 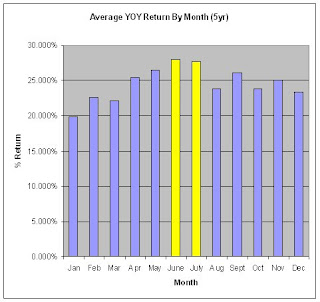 While the grouping is much tighter, the results are similar. So again, if you invested every June 1st and then sold out 5 years later on June 1st you would have an average rate of return of 28%.

On a quarter by quarter analysis you would achieve the following. 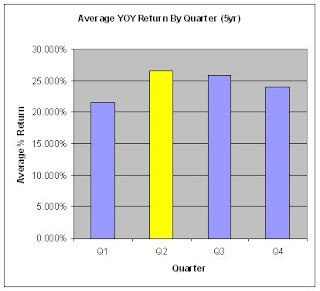 What does this all mean? Well there is no motivation for procrastination here it appears. if I hurry up and get organized I will be able to put my tax return in and have it processed before the end of Q2 which historically speaking would give me the opportunity at a higher rate of return. Food for thought.