First of all, data measured in absolute numbers over time runs the risk of being irrelevant unless compared to a meaningful standard. That is, trade numbers by themselves over time don’t tell us much, because the country has gotten richer over time. It makes more sense to compare the trade deficit to GDP over time in order to get a better handle of its magnitude. Here’s a look at the US trade deficit as a percentage of GDP since 1960: 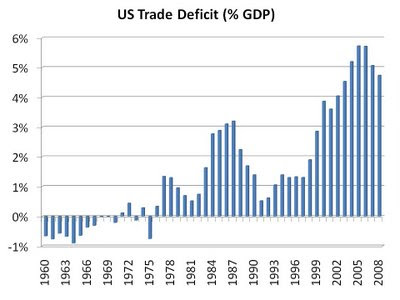 Even by this measure, the trade deficit has undoubtedly increased in the last several decades. It is unlikely that the US can sustain such a deficit for an extended period of time. However, note the recent decline due to the fall in oil prices and reduced consumption, which should continue to persist into this year.

The second often ignored major contributor to the trade deficit is the exceptional oil price of the last several years. This number represents about one third of the entire deficit as demonstrated in this San Francisco Fed Economic Letter.

However, instead of taking money from successful companies (in the form of government bailouts or protectionist measures) in order to invest in failed companies in old industries that are now disadvantaged in the US for various reasons including a higher prevailing wage rate, the path to prosperity is through the jobs of the future. Economists agree that comparative advantage results in increased wealth for both trading partners.

Therefore, rather than taxing successful companies (through protectionism and bail-outs of failed companies), the government should pave the way for next generation of jobs that will help carry the country into the next century. For example, considering that 33% of the trade deficit is in the form of oil, the trade deficit can be meaningfully reduced by investing both on the supply side (e.g. exploration and drilling in the US in currently banned areas along with investment in cleaner forms of energy) and the demand side (e.g. more efficient technologies, conservation methods etc) of energy.

In a previous post, we saw how protectionism likely contributed to the Great Depression.