The current official unemployment figure (9.5% for June) should be replaced (or at least supplemented) by a better measurement of actual unemployment. Unemployment should be measured in terms of hours worked by all employees, full-time and part-time. Counting full- and part-time workers equally is giving misleading statistics. Hours per employee, which are changing over time, are not properly recognized in unemployment as currently reported.

Part-time employment for economic reasons – U.S. Dept. of Labor (DOL) terminology – is not directly recognized in the official unemployment rate (U-3). If a person who is working half-time wants to work full-time, but cannot find full-time work, this is the equivalent of half a job lost. The same is true for an employee being forced by an employer to cut half his hours. 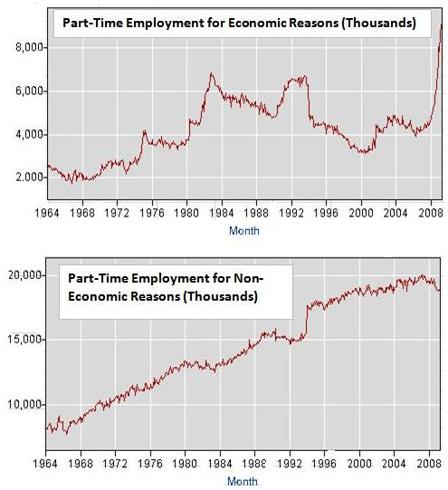 The official DOL unemployment rate counts either individual equally with full-time employees in measuring the level of employment. This was discussed in recent articles (here and here) and will be analyzed in detail in this article. John Mauldin has also discussed this problem is some detail recently (here).

Involuntary part-time employment increases significantly in economic downturns, whereas part-time by choice (“part-time for non-economic reasons” in DOL terminology) is much less changed from its trend roughly proportional to the increase in the workforce with time. This is shown in the following two graphs (from DOL BLS Table A-5).

Note that there is a big jump in the non-economic graph from December, 1993 to January, 2004, presumably from a change in the measurement rules. There is a drop of the same magnitude for employed part-time for economic reasons at the same time. Apparently, at that time, some of the people who formerly would have been counted as involuntary part-time were transferred to part-time by choice.

There are a number of areas that must be examined to try to determine how involuntary part-time employment should be included in what I have chosen to call “implied total unemployment”. 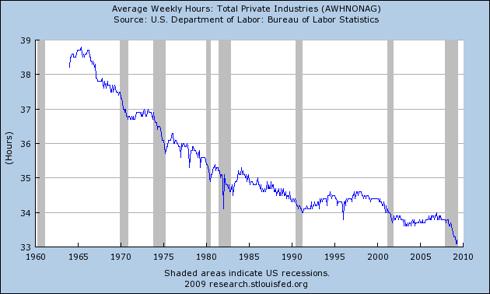 What Is Full-Time Employment?

The DOL does not define the length of a full-time work week. They state that is the domain of the…
END_OF_DOCUMENT_TOKEN_TO_BE_REPLACED