Sloppy day and my first losing session in awhile. AIG was the stock to play today from my watchlist, moving nicely and I did not enter when it broke down at ORL (short) and then bounced from $14 (long).

CSX I took partial profit and was stopped out the remaining shares when it turned against me, and bounced off ORL instead of breaking down. HNT did not fade at $12 in my first transaction; my stop losses were filled. I flipped a half position and made up some of the loss right afterwards. Later, I longed a full position at $12.20. Much of my watchlist was green and breaking out at the time, but ORH acted as resistance and it did not breakout right before lunch. My stop orders did not fill so I got a lousy exit and accidentally entered another 1/2 position short in the ensuing messiness. MHK I thought would fade at $35; it didn’t and my stop loss orders were filled. I flipped a full position and made most of the loss up. However, it fell quickly and I lost some of that profit in another fill for 100 shares that did not get completed. So about $15 in slippage and $5 from ordering errors. None of the set-ups played out as I thought today. 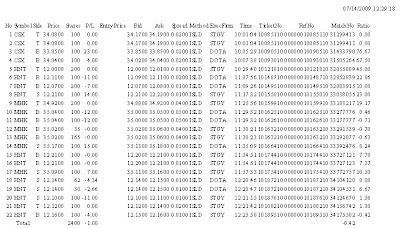