Last week I played around with two experiements. Both were performed in the forex markets on the EUR/USD pair. The first one I tried had to do with rollover. It failed miserably. Rollover is a part of currency trading that occurs when the two currencies you’re trading have different interest rates. You are either charged or credited depending on whether the difference between the rates is positive or negative.

If you’ve ever heard of the carry trade, that’s basically what I did. I found a currency pair with the highest rollover rate and put on a trade at 4:59pm EST. At 5:00, the rollover rates associated with any pairs you have in your account are either added or subtracted (depending on if they’re positive or negative) from your account.

Unfortunately, right when I put on a trade I started losing pips as the market went against me. I held out for the rollover, but it was terrible–a fraction of the spread.

Verdict: Unless you can get a rollover rate of 5pips or more, the trade isn’t worth it. Of course, if you were going to put on the trade anyway, you might as well take the extra fractions of a pip. While your broker’s rollover rates may be different (they vary), most of the rollovers at my broker are less than 1pip. If the market moves against you, you will get screwed.

The second experiment I did involved hedging a single currency pair. I would buy and sell the EUR/USD pair at the same time. Then I would place limit orders for each at points of resistance. When the pair reached that point the position was covered and, hopefully, the currency would came back towards the purchase point of the other pair. As it did, I would hedge again, locking in any gains I received.

This worked really well for me because the market is entering an area where a lot of retracements are occuring. If the market were trending, I’d do better off riding the trend. But since I don’t know if it is going to go up before it goes down, or vice versa, but do have a general idea of where it will find resistance, I can hedge the pair and benefit no matter which way the pair moves at first.

Here are the results (I did this in that $25 free account I got from FXCM a while back): 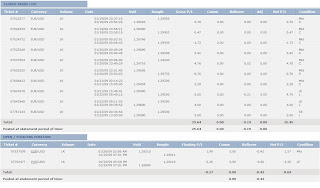 Disclaimer: Do your homework and take responsibility for your risks. Play with a small amount or with a demo account before putting serious money into the market. I don’t want to hear of anyone who was hurt financially by the above experiments. Remember, the first one failed miserably. And just because the second one happened to make me 100% in a week (albeit, that’s only $25) does not mean it will work next week.